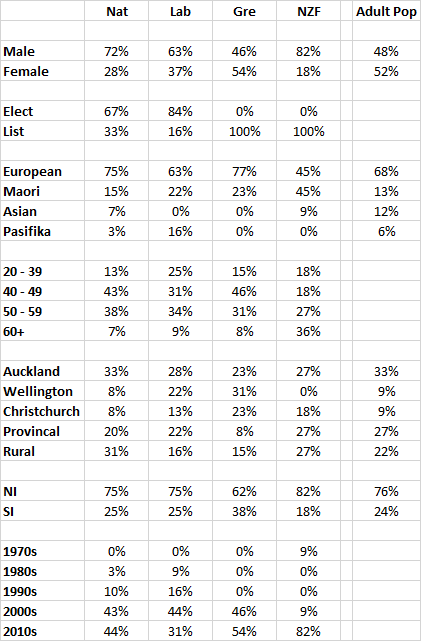 I’ve analysed the demographics of the caucuses of the four larger parties. Some interesting observations.

The Greens have the highest proportion of women, and NZ First the lowest. Labour has a higher proportion than National, however Labour’s is lower than in 2011 and National’s is higher.

Labour implemented a rule that 45% of their caucus must be women, and they went backwards – from 42% to 37%. National improved, despite having no rule. Reinforces my view that gender quotas are silly.

The Greens are over-represented with Maori MPs, and have no Asian or Pasifika MPs.

NZ First are over-represented with Maori MPs, have their first Asian MP and no Pasifika MPs.

Note that I do not advocate that a caucus should have the exact same proportions of MPs by ethnicity as the NZ adult population. But neither do I think it is a good thing if a caucus consists of MPs from one gender and ethnicity only. A diverse caucus that is more representative of NZ is a stronger caucus – but it doesn’t have to match exact proportions with some sort of quota.

All parties, except National, are under-represented in Auckland.

Labour and Greens are massively over-represented in Wellington.

In total 25% of the Labour caucus entered Parliament before 2000 compared to 13% of National.

UPDATE: Tracey Martin informs me that NZF MP Darroch Ball is of Tongan and Kiribati descent, so NZ First also have a Pasifika MP.