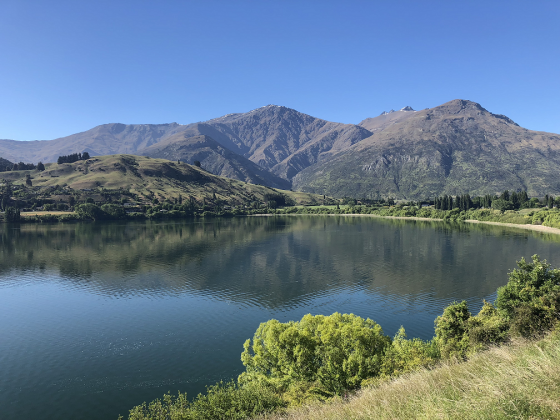 Photo of Lake Hayes taken during the race

Did the Queenstown half marathon yesterday. Did the full two years ago but as I only seriously started training for it after the election, the half was a very good choice.

What also attracted me to the half was it started and finished at Millbrook. Great excuse to stay there and could leave your room just before the start rather than have to catch shuttles two hours before hand.

So I left my room around 7.15 am which would get me to the start around 7.23 am. But around 7.22 am I noticed I had left my blue tooth headphone behind so rather than face a couple of hours with no audio, I sprinted back to the room to get them. I then ran back to the starting area and got there at 7.30 am on the dot.

Sadly I had not realised there was a separate start area for the half marathon. I wondered why none of the couple of hundred people were actually on the track. I then noticed they all had different colour bibs. I inquired if this was the half marathon start and they said no, that is a few hundred metres up the avenue.

So I then started sprinting out of the marathon starting area to the amusement of the MC who announced David is starting his half marathon several hundred metres early. I got to the start of the half and there was no-one there. A couple of officials were surprised to see me run up, especially as the tail-end charlie was already a couple of minutes away.

I managed to catch up with the tail-end in around a km, fairly puffed by then as I had been basically running since 7.22. The one good thing about being at the very very back is no-one gets to overtake you – you just get to over-take others!

As I had not trained much, I wasn’t competing for time but just to enjoy the views and they were spectacular. You can see one photo above. Was a perfect day, and it truly must be the most scenic running course around.

The first 17 kms or so were the same route as the full marathon I had done in 2015. It was just a four km distance back from Lake Hayes to Millbrook. Sadly at 2 kms to go you come across a gigantic hill which makes you feel about as cheerful as a cat owned by Gareth Morgan. It was called Christine’s Hill and many of us were cursing Christine. But after the climb, then all downhill and flat for the last km to the finish line.

Despite Christine’s Hill, enjoyed the run and already thinking of coming back in 2018. It really is just the most beautiful area.