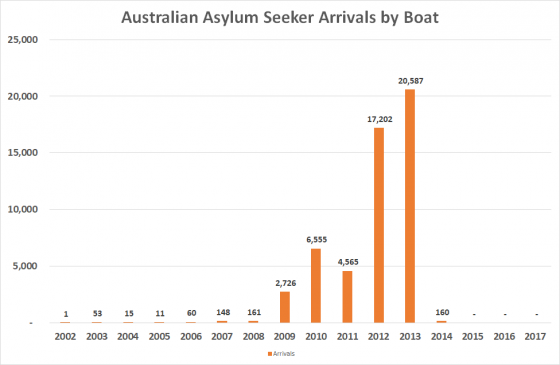 As the focus goes on the remaining asylum seekers on Manus Island, it is worth remembering why Australia has such an uncompromsing policy on not allowing people who arrive by boat to be settled in Australia.

This shows the number of asylum seekers arriving by boat every year since 2002. During the Labor Government the numbers increased exponentially. In 2013 there were over 20,000 arrivals by boat. If the policy had not changed that number was likely to keep growing. There could well have been a further 100,000 by now.

Instead there has been, well zero. Yes, zero. Why? Because incentives matter. People smugglers won’t convince desperate people to pay them lots of money and try to sail to Australia if they know that arriving by boat means they will never get to settle in Australia. 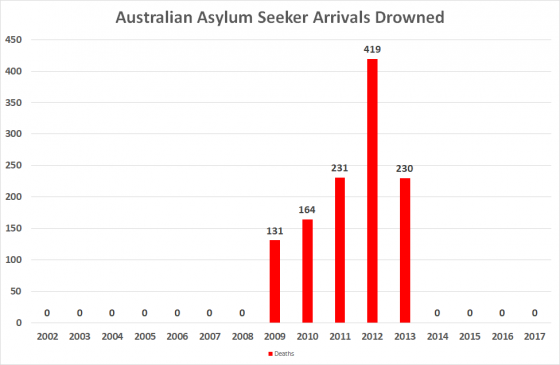 And this is the more compelling graph. The former “kind” policy saw hundreds drown at sea. I’m not sure there is any good way to die, but I am sure that a very bad way to die is in the middle of the ocean in a storm in an over-crowded boat. And many of those drowned were kids.

So the “kind” policy saw over 1,200 asylum seekers drown horribly at sea. The “nasty” policy has seen that number reduce to zero. Not ten, Not five but zero. And it has been zero for four years in a row.

So one can of course have lots of sympathy for the poor people on Manus Island. They wanted to live in Australia and instead they are now living in Papua New Guinea.

But decisions have consequences. If one allowed the few hundred remaining to live in Australia, then it is absolutely certain that the people smugglers would be back in business and the sailings and drownings would increase again. It is not a coincidence these numbers have reduced to zero. It is a direct consequence of Australia’s policy.