Area D2 is complete and has been cleaned and photographed as a whole.  Here is a final image.  Dr Jeff Chadwick the site supervisor is pictured and you can clearly see the northern side ‘E’ structure that forms part of the Philistine reinforced ‘Nixon Water Gate’ (more understood after excavation on 4 July) that they built over Canaanite earl structures. And below that, some extrapolation.

As my colleagues and I in 82C-D finished ahead of schedule, I moved to another site, Area M, which was newly opened elsewhere on the Tell in 2018.  This site was chosen as we detected anomalies using remote sensing in late 2017 and hoped to find evidence of oil press or brick kilning production. (“Gath” means “il press” so we thought perhaps it was a major activity of the city). The squares were laid out and first sods turned.  Almost immediately we hit pay dirt –fallen vessels laying only 5cm under the surface and where they had laid since 830BC.  This was obviously the Hazael of Aram-Damascus destruction layer when he laid siege to Gath and completely destroyed it.  I joined my colleague Olga Primakova from Russia who lives in Israel and is completing her PhD on a private collection of ancient artefacts otherwise unknown or published. 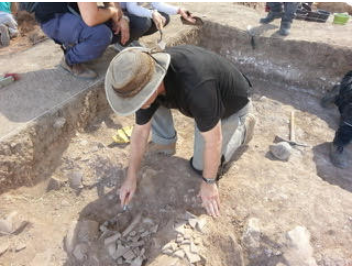 After only a few minutes in the square with Olga, I strike this, which at first I thought was a skull.  Right size, right texture and fragility.  Human remains are actually a pain, as they slow up an entire excavation in a square.  But what a find if so! 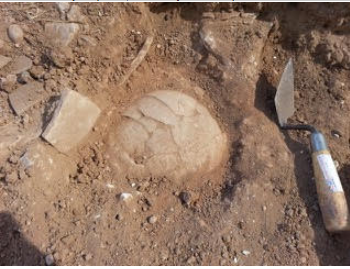 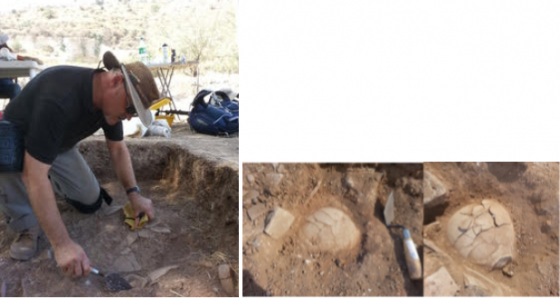 But then this delicate bottom edging appears, and it is obviously a vessel of some description.  Here is a series of pics as this pot emerges from the ground and Olga and I lower the floor of square M to uncover this beautiful vase. 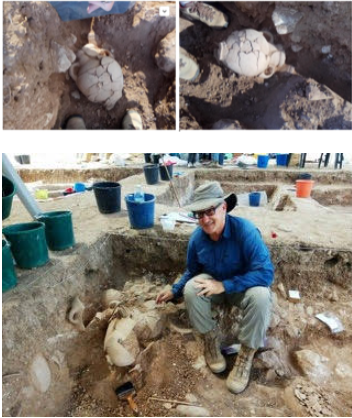 Prof. Aren with the same pot (top left directly beneath the black bucket) and some others emerging around it.  My speculation is that this is probably a storage room full of pots on shelves, as Area Y across the way has almost no pots, but unusual features that may be evidence of chalk working/plaster making and perhaps brick making. When the city was attacked, this room was set on fire and the shelves burned.  The smallest pots would have been up high, and have fallen in onto of much larger vessels which I expect we will find below as we probe deeper. We might also find weaponry and perhaps Philistine victims of Hazael.  We have excavated perhaps 1/2 metre already.

Below: The ‘skull pot’ top right.  Now note the longer elongated pot in foreground and its spot decoration.  This is a type of Philistine pot we know from elsewhere (see below from a museum).  Unfortunately the earlier examples were all cleaned, but this time –speculating it may be something to do with making cheese– we whisked this away to the lab for organic analysis.  Perhaps we’ll find remains of cheese or some other substance inside the holes. Susan in archaeo-biology maybe able to tell us what it was used for to make.  It could be a smoker, or some sort of container to boil something in, that is dipped into a wider vessel of hot oil or water. 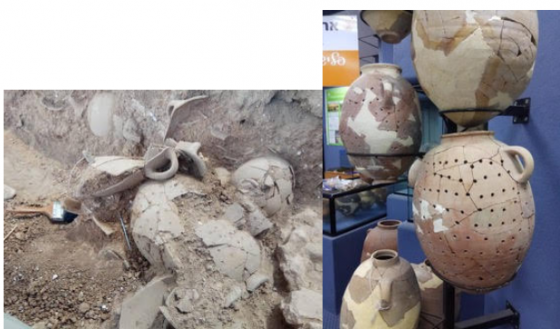 A general view of our Area M square. 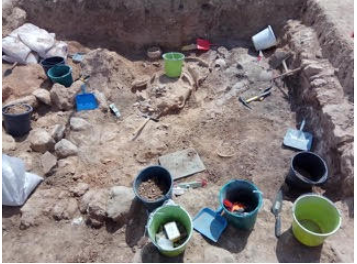 Other archaeologists join us as Area D comes to a close, and now intact vessels are emerging from the ground.

Eitan joins us, and late in the dig finds this remarkable sculpted lizard crawling across the lid of a jar.  I mentioned earlier that
the Philistines were quirky when it came to art and liked animal and floral motifs.  This is a really good example.

On the last day of the dig this intact pot emerges. Aren Maeir reports…“As in the books, regarding Murphy’s Law in archaeology, today, as we finished final photographs and were about to cover over the areas, an intact jar was found in Area M. Due to the fact that it stuck out quite clearly from the balk, we had to quickly excavate it and remove it – along with a large amount of broken pottery from other vessels from its vicinity.” 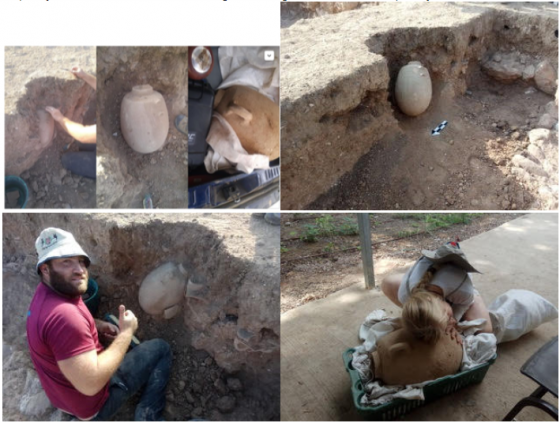