When archaeology was a fledgling science, it was little more than treasure hunting.  But as it progressed, a more professional approach evolved as we sought knowledge and an understanding of an area as much as the finds that could be had.  Obviously metal or terracotta artefacts are wonderful to find, but of as much value in modern archaeology are soil stains, evidence of layers, stratigraphy, and foundational architecture which tell us about the layout of a place and what it might have been used for.  Ancillary information such as that can tell us a lot about the people we are studying, what they were doing, how they lived, what they ate, and often what is missing has as much to say as what we actually find. Ie, what we don’t find.

This is quite true in the case of Gath in season 21 (2018) where we are digging this season with a special focus on locating the gate of Gath (what my colleagues and I digging in the actual square labelled the Nixon Watergate’). Gates were important in ancient cities. As I write, there has been a significant gate find near us, at biblical Bethsaida on the Golan Heights, home of three of the Apostles.  See here via Patterns of Evidence: 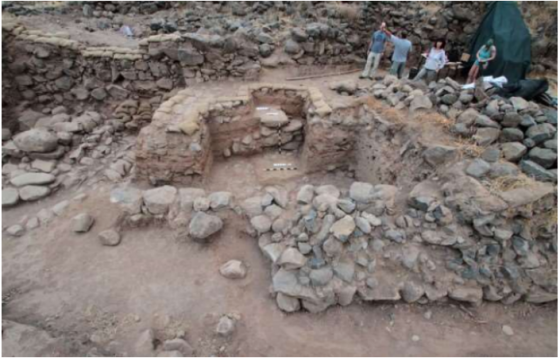 Gates of a city were really the ‘hang out’ place, where business was conducted, where the city elders sat, and often where commerce or ‘retail’ took place. City fathers would witness land transactions in the ‘gate of the city’ (often swapping a shoe to acknowledge receipt) and you might recall Abraham’s nephew Lot in the Bible “sitting within the gate” of Sodom where he met the two angelic visitors.

In the image below you can see a layout of Philistine remains from up on the Tell of Gath. But in 2018 we are focussed in the lower city (D2) next to the Elah valley brook (or wadi) and the architectural layout of the water gate of Gath, as well as three other nearby areas also on the lower city flat.

These are worked out in a series of 2m x 2m ‘squares’ within ‘bulks’ in-between. The bulks allow us walking access as the excavated squares deepen, sometimes to well over ten feet deep as we progress downward uncovering different layers of interest. The areas of study are often determined by topography or using drone surveys and electromagnetic surveying, which reveals underground anomalies. This was done late in season 2017 and set us up in 2018 with some ‘on the money’ archaeology for the season (Area M especially – of which much later). 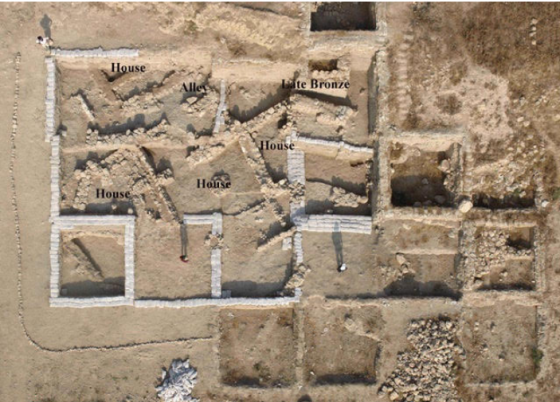 Below is our field working plan of part of the dig (there are three other areas and this is Area D where I am working).  The foundation of a gate structure (the large ‘E’) was uncovered last season.  We believe there is probably a mirror ‘E’ on the other side to form the Gath water gate. I am working in 82D which is smack dab in the middle of where that should be, so we would hope to find it as we go down.  But it may not be there.  Understanding this ’E’ structure and its possible partner and how they relate to the surrounding architecture and comprise ‘a gate’ is our principal focus this season.  The two cubbyholes are common to a gate, and it would be in these that the fathers or elders of a city might sit, like customs officials or city security.  This is where Lot would have been sitting inside the Sodom gate in the biblical story. 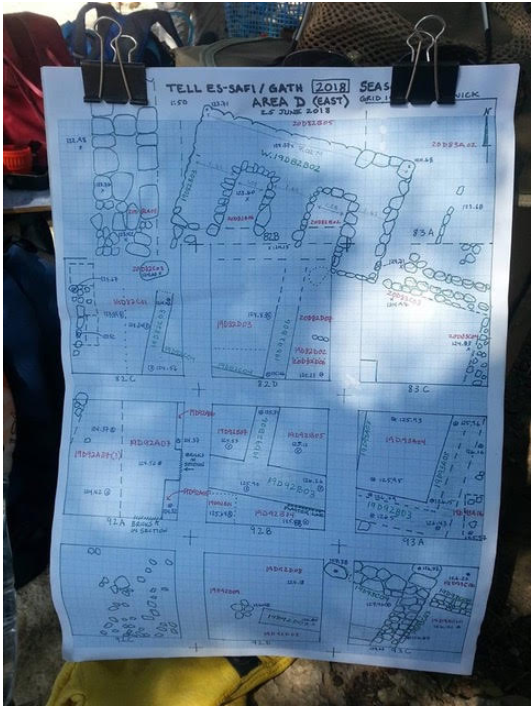 And this is site supervisor Dr Jeff Chadwick’s schematic of what we are looking for.  In a few days our archaeology will answer solid questions around these speculations. I am excavating in the middle of the two ‘E’s’ where the word “(fill)” is. 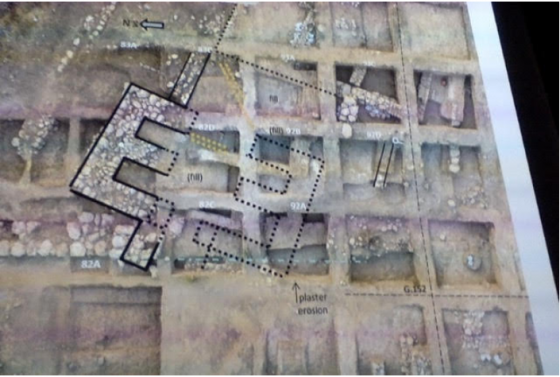 Kiwiblog readers taking an interest have asked for more on the people, so in the next post I’ll start blogging on some of the people involved in this excavation this season, as well; and a requested, post more images. Kia Ora everyone.