The implied reason for banning plastic bags is due to their polluting nature in the marine environment. The assumption seems to be that marine animals turning up dead with plastic in their stomachs in other places, means that the same thing must be occurring in NZ. However it seemed a stretch to me, to assume that sea life say in the mediterranean was (a) the same that occurs in NZ waters and (b) they are exposed to the same plastic debris in NZ waters.

I attempt to keep an open mind on things, since until the data is reviewed, one cannot make any conclusions. Hence I set out to review the literature on NZ animals.

Anecdotal evidence, is obviously not perfectly reliable, but may indicate trends. I regularly pick up litter by our roadside areas which boarders onto the Waikato river. And also remove litter from the riverside. What I have observed is the litter is dominated by drink containers. Glass beer bottles, aluminium RTD’s and plastic water bottles. The second group is fast food litter. It is said that most plastic in the ocean comes from land users, incorrect disposal of rubbish. Thus I would conclude that the plastic flowing down the Waikato and out to sea is PET drink bottles. Thus plastic bags are not thee dominante polluter.

But in stating this on facebook, two friends who live by the sea and regularly walk the beaches stated that the most common thing they find are plastic bags.

Thus we can tentatively conclude that plastic bags are making it into the marine environment and staying suspended such they wash up / blow onto beaches. So they could be a significant source of pollution in the sea, even if they don’t make up the largest plastic by say volume, or weight.

The next stop, was to find scientific studies looking at stomach contents of marine animals. Given save the whales has an emotive ring, I started with whales.

How about sperm whales? Of the 19 sperm whales beached between mid 90’s and 2004, no mention of plastics again occurs.

Long‐finned pilot whales? Ditto, no mention of plastics in the five whales that beached themselves on Farewell Spit in 2005.

There did not appear to be other studies of sea mammals stomach contents in NZ. From this data I would conclude that sea mammals are either not interested in eating plastics, or if they do, the plastic is small enough to pass through the digestive track without difficulty.

A doctoral student investigated the stomach contents of 35 green turtle (Chelonia mydas) 2007 and 2013. The green turtle was thought to prefer warmer waters than NZ, so it was surprising to find that these turtles are feeding in NZ waters throughout the year including winter, when the sea temperatures are below 14 degrees, and it was assumed that the turtles would migrate out of NZ waters at this time. However they did not appear to do so.

The population in NZ was found to be made up of turtles from the West coast of Mexico / South America and also turtles from East coast and easterly islands from Australia and up to Guam. One expects the connection with seas north of NZ, but was a surprising result to see animals from East of the Americas coming to NZ.

Plastic was only found in approximate a third of the turtles (12 of 35). Which surprised me, as I would have assumed that given the media beat up around turtles and plastic, that nearly all turtles would have been affected.

It should be note that these turtles are all juveniles. They take 20 – 30 years to become sexual mature. So given they have migrated from regions with poorer rubbish disposal than NZ, it could be argued that at least some, if not a significant proportion of the plastic may have come from waters outside of NZ. There was a piece of plastic found in one stomach that had a wellington business address printed on it, which implies that at least some of the plastic originated in NZ.

The plastic was broken down by type, and by color. These are shown in Table 1 and Table 2 respectively. What is interesting is that if you remove all soft plastic, which plastic bags are that the turtles would still have plastic or human created debris in their stomachs. Thus the reduction of turtles with plastics and human waste in them would not significantly reduce (that is an intelligent guess that it wouldn’t be statistically significant, since it would only reduce by 1 turtle). On the other hand, soft plastic did make up 50% of the total plastic waste. So there would be a large reduction in the total volume of plastic in these turtles stomachs. 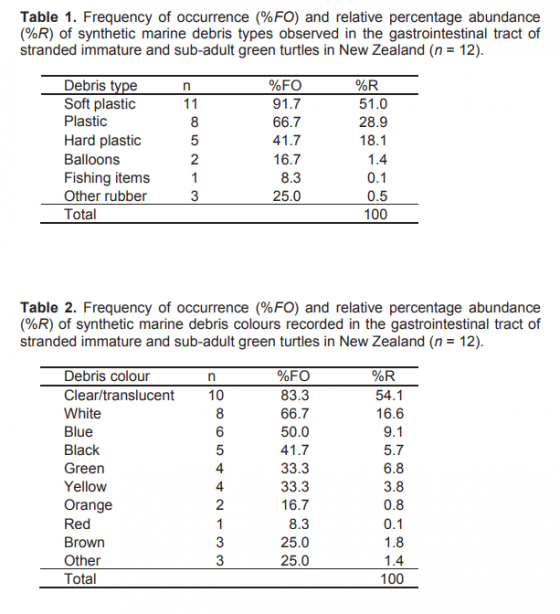 Included in the thesis is a photo showing the plastic found in turtles. Visual observation shows that this plastic does look like plastic bags. As I can’t think of any other source of this type of pollution. If you look closely on the left hand side, at the top of the second blue square, you can see a turquoise plastic fragment. I strongly suspect that this is from silage wrap. 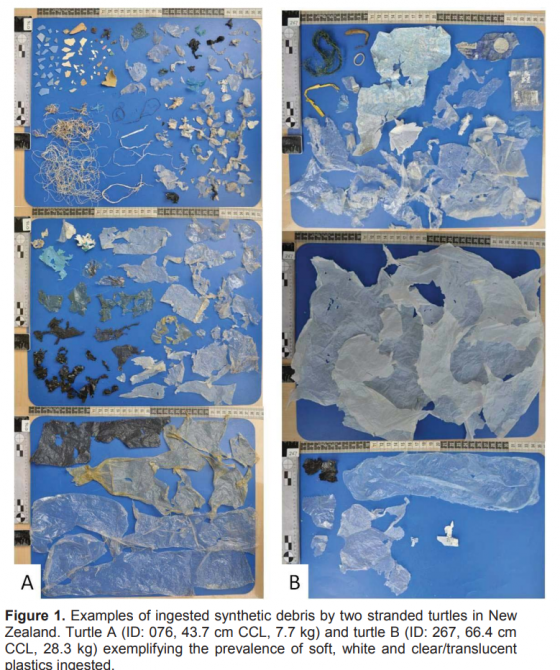 So we can conclude that of the green turtles that migrate to our shores, consume plastics in the oceans around NZ. And this plastic consumed is dominated by plastic bags.

It is considered common knowledge that turtles eat the soft plastic bags because it either looks like sea lettuce that they feed on, or look like jellyfish that they see as food.

Thus it would be a reasonable assumption that other marine animals that feed on sea lettuce or jellyfish may be impacted by the plastic bags. However

Banning recyclable plastic bags, are likely to have an impact on humans. For example we gift away a lot of produce from our orchard….. all in plastic bags. Others use them to pick up dog poo. These types of applications can be replaced by purchasing packets of paper bags, or other plastic bags like lunch bags. So these behaviour changes involve costs, but not much risk to human health.

However grocery shopping is a different kettle of fish. It would be easy to see how a bag could be contaminated with meat product. And this could be transferred onto fruit or vegetables that are not cooked before consumption, or contaminate surfaces of packaged goods, which go onto contaminate kitchen surfaces.

Thus you would expect to see a rise in disease with recycling of grocery bags. This is indeed what you see. Data mining to extract the impact of the San Francisco County ban on plastic supermarket bags, there was a 32% increase in E. Coli, 27% increase in Campylobacter, 6% increase in Salmonella, but not increase in Toxoplasmosis. Disturbingly there was a 46% increase in deaths from  foodborne diseases.

It is well known that NZ has very high Campylobacter rates. Using readily accessible 2012 data 7031 cases were reported, which gives an 159 per 100 000 people, which is the highest in the developed world.

Another grim fact, is that for every campylobacter case reported, 9 go unreported. Thus infect rates across NZ are approximately 1% of NZ’ers get campylobacter every year!

So an increase in infection by 30%, is going to effect approximately 20 000 people.

In 2016, there was 712 hospitalizations due to campylobacter, (fortunately no deaths), so a 30% increase would results in an additional 214 hospitizations.

Given that NZ health system is already stretched, an additional 20 000 illnesses and 214 hospizations is going to put additional stress, on an already overstressed system.

The only NZ sea animal that is known to be negatively affected by plastic bags are sea turtles. These are not unique to NZ, and only 30% seem to be affected by eating plastic bags. Also NZ culture does not value these turtles as unique indigenous animals, like for example a tui.  Removing plastic bags will reduce the plastic ingestion, but not eliminate it. Although other sea animals may feed on the plastic mistaking them for sea lettuce or jellyfish, this is conjecture at this stage.

There are important health effects for humans, with an additional 20 000 people getting infected with campylobacter, and an additional 214 hospitizations. That isn’t counting any other foodborne diseases increasing.

So do the benefits to sea life outway the negatives to humans? Well to save a handful of animals not unique to NZ, while creating 10’s of thousand illnesses every year, to me is not a wise choice, and one that I cannot describe as ethical.

David Whyte is a speaker, researcher and author