Let us start with John Armstrong:

If that was not enough, there were further shockwaves with yesterday’s Dominion Post making fresh allegations surrounding NZ First’s handling of donations, questions about whether the racing industry source of those donations has compromised Peters as Minister of Racing and claims that taxpayers paid his lawyer’s legal bills through Parliamentary Service funding.

Those allegations were largely unsubstantiated, making it fairly easy for someone with Clark’s experience to bat away the resulting questions. She may have only brief respite, however. The confidence with which the newspaper made the claims suggests it has the documentation to back them up – with maybe more to come.

Indeed, and remember Phil Kitchin here is the journalist who exposed Donna Awatere-Huata and the Police misconduct in Rotorua.

Peters dismissed the article as “a smear campaign of unsubstantiated allegations”. But Clark realises, even if Peters won’t, that such responses are no longer satisfactory given the seriousness of the allegations he is facing.

Well they had a photocopy of a cheque on their frontpage. That seems to have a degree of substantiation. But as Armstrong notes, Peters has problems claiming it is all lies, because he said exacly that about the NZ Herald e-mail. He said they fabricated the e-mail and that they were lying and they were not.

She urgently needs to move this dreadful mess off centre-stage – both for her sake and Peters’. She has accordingly dropped big hints to relevant Government agencies to investigate the claims if they see fit.

Those agencies are an ever-lengthening list – Auditor-General Kevin Brady; the Registrar of MPs’ Pecuniary Interests, Dame Margaret Bazley; the Electoral Commission; Inland Revenue; Parliament’s Speaker and privileges committee; the Cabinet Office; and even – as Clark mentioned – the police.

Ever since the issues of Taito Philip Field, I have believed that NZ now needs an Independent Commission against Corruption that has powers to investigate all aspects of corrupt or highly unethical behaviour from Ministers, MPs and other very senior holders of public office. Having six different inquiries taking place like a fragmented jigsaw is not as good as one competent investigation with full powers.

I would love National to pledge to establish such a Commission. It would be a noble thing for them to do, as their own Ministers would be the first one to be subject to its scrutiny – but it is needed as we have seen in recent years with Field, Awatere-Huata, the various Immigration Service affairs, the Benson-Pope affair etc.

Questions were also raised in Parliament as to whether Mr Peters declared that his party had received substantial donations from the racing industry, where the Vela brothers are big players, before negotiating the post of Racing Minister with the Prime Minister.

And then proceeding to force Cullen to such generous funding of the racing industry that they ignored strong Treasury advice against it.

Incidentally while the Velas have New Zealand citizenship, like Owen Glenn, I understand they are (or were at least) officially foreign residents and only visitors to NZ for tax purposes . So once again the great crusader againgst foreign investment is revealed as having his major funders being foreign residents.

New Zealand First did not dispute reports that Mr Henry had been paid an amount from the Parliamentary Service last year but that is understood to have been for contracted work on the Electoral Finance Bill, not for litigation.

Jesus Christ – $45,000 for advice on the Electoral Finance Bill. Considering how often NZ First keep breaking their own law, they should ask for a refund.

But she appeared to be thrown by a question from Green Party co-leader Russel Norman on non-declaration of possible conflicts of interest.

After over a week of silence, it is good to see the Green Party finding its voice.

Mr Peters’ New Zealand First colleagues all took turns to ask questions focused on an aspect of his achievements as Foreign Minister.

This was so sad, I actually felt sorry for them. Like lemmings, one after another asked a pitifully sycophantic question to Helen lauding the fact Winston had gouged the taxpayer for more money for MFAT or the such. None of them were allowed to even try and engage on the central issue of the secret donations.

What was also interesting is that NZ First asked more than their four allocated supplementaries which means Labour must have donated some of their quota to their good mates in NZ First.

Mark Keating does an op-ed on the taxation issues around the donation. This is a fuller version of what I summarised yesterday. I did find this line very funny:

Mark Keating is a senior lecturer in tax law at (ironically) the Owen G. Glenn Business School of the University of Auckland

Finally we have Rod Emmerson: 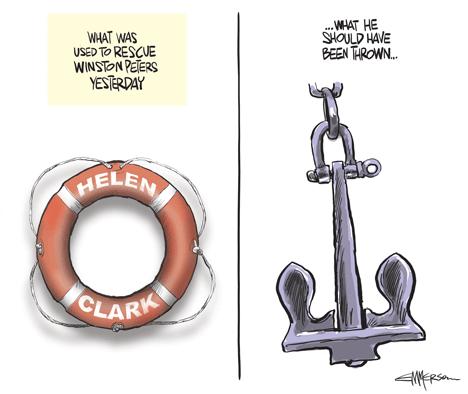