Thanks to the help of some volunteers going through dozens of set of annual accounts, Kiwiblog is able to present some original research on big money in politics. We have gone through the annual accounts of every union and business group we could find.

The findings may surpise some. The unions are far wealthier than the business groups.

There have been 256 unions registered in New Zealand. To make it easy we have only focused on those that are millionairres – have more than one million in equity.  There are 19 of these, including the NZCTU – their federation.

We looked at three financial indicators:

The table is below: 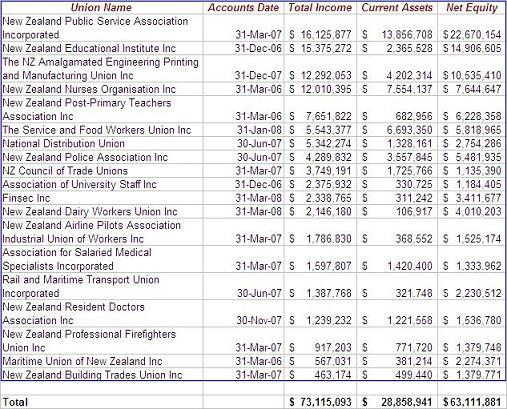 Also as a minor note, five unions have yet to file their 2007 accounts.

Now compare this to the major business groups:

There are various small town chambers also but they have little money. The Business Roundtable is as unincorporated society and the Wellington Chamber of Commerce a company so their accounts are not public. But in each case I have checked my ballpark estimates with the organisations and they have confirmed they are in the right ballpark.

So we can see that the business groups have under half the income of the big unions. And the Business Roundtable has less turnover than some student associations. The CTU has a bigger budget than Business NZ.

So there is no doubt unions have far more income and money than business groups. So the next question is do they spend it on politics and elections?

If we look at the Electoral Commission’s register of third parties, we see not a single business group listed but 12 unions (including NZUSA) listed.  So they have the ability to spend $1,440,000 on direct election advertising.

But that is only part of it. The unions try to influence the elction in multiple ways. For example:

The worth of the staff contribution especially can not be easily estimated but it is massive. readers have sent in several photos of union vehicles beign used by Labour candidate and union e-mail addresses being listed as campaign contacts for various electorates.

If even just 200 union staff (three per electorate) spent 160 hours on the campaign, that is equal to a million dollars equivalent wages.

Of course we don’t know the total amount of money spent by unions on electioneering. Perhaps any successor to the Electoral Finance Act should force unions (and other bodies that get involved in election campaigns) to disclose their total involvement. That would be a step towards transparency you could argue.

Now this is not unique to New Zealand. In the last Australian election, the uniosn spent over $10 million campaigning to help the Labor Party. The total spending by business groups was $32,000. So unions outspent business groups in Australia by 300 to 1.

The purpose of this article is not to advocate that unions should not be able to spend their money campaigning. Far from it. It is to reinforce two points:

I actually think NZ needs a pro-business, pro-market, low-tax lobby group to match the unions in terms of involvement in campaigns. A NZ version of the Americans for Tax Reform or UK Taxpayers Alliance. It wouldn’t be a thinktank (NZBR and CIS do wonderful jobs there) but an aggressive lobby group that would aim to lower taxes, keep government spending under control and support policies good for taxpayers.

Without such a group, the big money spending in elections will continue to be dominated by unions.