Last week Tumeke blogged a snapshot of all the twitterings about a a possible tsunami threat to New Zealand. 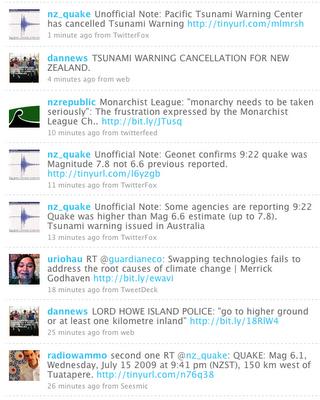 Now by coincidence I know a little something about tsunami warnings. Not because I am omniscient, but because I attended a briefing for media organisations a couple of months ago by the Ministry of Civil Defence and Emergency Management. And I have been waiting for an opportune moment to share my learnings.

You can read for yourself the handout we got at the briefing.  The key thing for me is this:

Basically you can almost ignore any warnings that comes from the Pacific Tsunami Warning Centre. Generally the warnings they generate are automated. They are not saying there is a tsunami, let alone it may hit NZ. A warning gets generated on fixed criteria, such as an earthquake of a certain maginute within a particular area. The PTWC warnings are not designed for the general public, but for government agencies.

The MCDEM gets notified of any PTWC warning, plus receives its own data from Geonet. They then decide what risk, if any there is to NZ.  Most of the time there is none. They will then issue one of three statements:

So unless the warning has come from MCDEM, it is just an automatically generated warning from PTWC. NZ gets around one of these a month, and none have ever eventuated in the last few decades.

However there may be times that a tsunami is generated locally. Or in other words it will hit within 30 to 60 minutes, not hours. If one is generated locally, then it may hit before an official warning is possible. These are the warning signs for people in coastal areas:

If you observe this, move inland and to higher ground promptly.

I suggested to MCDEM that they should look at having an official Twitter account. Twitter can pass on an official warning quicker than almost any other medium through retweeting. And I think many would subscribe to such a Twitter account – even if it very rarely will have anything to say. They seemed to think this was a good idea, and I got the impression it may happen at some stage. It may also have the benefit of people not over-reacting to PTWC alerts.