The Royal Forest and Bird Society is having a poll for Native Bird of the Year, and various people (including me) are campaign managers.

You can vote in the poll here. 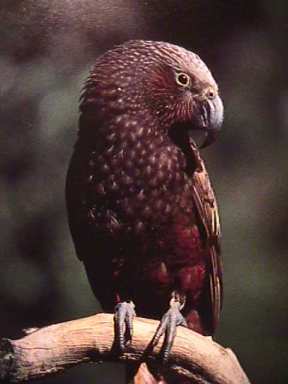 I have blogged for Forest & Bird on why people should vote for the Kaka:

The Kaka should be the Native Bird of the Year. The kaka was named after the sounds it makes as an alarm.  It is our native mountain parrot and is the best New Zealand traditions is a loud, noisy and dexterous bird.

As most New Zealanders are, the Kaka is a gregarious and social bird. They like to hang out in groups, and will even rail around a wounded comrade – often putting themselves at great risk.

Long before the first bungy jump was constructed at Skippers Canyon, the Kaka had its own version. You’ll see them slowly ascend and then suddenly close their wings and plummet downwards, pulling up just in time.

Kaka also make great parents. You’ll never see a Kaka investigated by CYFS.
They have sadly often been found dead at the entrance of their nesting hole after a forest fire. They refuse to abandon their offspring.

So for their noisiness, their supporting wounded colleagues, their bungy jumping and their willingness to die for their kids, I say make the Kaka the New Zealand Native Bird of the Year.”

So as Mayor Daley said, vote early and vote often 🙂