Labour MP Jacinda Ardern blogs her concern that the unemployment rate for under 20s has reached 25%. I share her concern.

I wonder if anyone else thinks that in hindsight maybe abolishing youth rates wasn’t the smartest move?

I know I only got some of my teenage employment because of youth rates. I started at $1.99 an hour.

The combination of ending youth rates and increasing the minimum wage to $12.50, has meant for some employers the cost of hiring teenagers has doubled.

Now when the economy was growing strongly, one could do these things without a big impact on youth employment. But this is the problem with so much of what Labour did – it was assumed businesses would always have money to burn.

The motivation behind increasing the minimum wage and abolishing youth rates was good. But as with most economic moves, there are almost always downsides to any initiative, and we are now seeing part of that.

The more expensive you force up the cost of labour, the less people in employment. Now that is not saying there should be no minimum wage, but a recognition that the more you increase it, the bigger the impact on jobs. 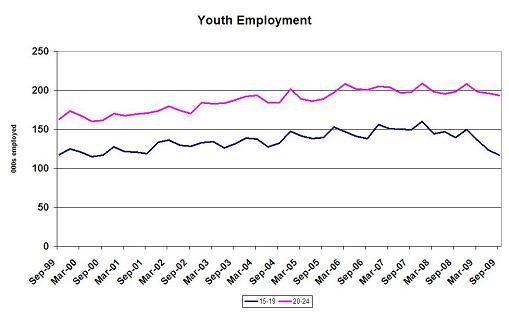 This is a graph of employment of both teenagers and 20 to 24 year olds. It is not seasonally adjusted so every December you see an increase due to holidays.

Hence I think the abolishment of youth wages is a major factor. Otherwise you would expect the two age groups to be somewhat more aligned.

Incidentally the teenage unemployment rate has always been traditionally high. Only once in the HLFS history, has it been under 10% – in September 1987.