Now again I want to stress that these are subjective ratings of journalists by MPs and press secretaries. A low rating is not necessarily bad, just as a high rating can mean you never offend anyone. Also for the avoidance of doubt the ratings are not my personal views, which would be considerably different.

These are the top ten rated journalists. The full list of all 34 is over the break for those who want it, but I prefer to focus on the top ratings.

Colin James tops the ratings, and NZPA has all three of its main staff in the top ten. NZ Herald has two, and Radio NZ’s Jane Patterson and ZB’s Felix Marwick (who sadly is leaving I think) also score highly. Jane Clifton and Marie McNicholas also there. Not that I think it is a factor, but five women and five men each in the top ten.

The range of scores show there is no unanimity with every journalist in the top ten having someone who gave then a two or lower.

The Nats top ten go from Peter Wilson to Jane Clifton. Claire Trevett and Rob Hosking are the only two in the Nats top ten, not in the overall top ten.

You can see in the table the breakdown for each party’s responses, plus the weighted average. The full set of data is over the break also.

Labour respondents have a very different top ten. Colin, Felix and Marie are on it, as with the Nats, but the five Radio NZ reports all are included, as is Scoop’s Gordon Campbell and TVNZ’s Fran Mold.

Those with the biggest difference between National and Labour ratings are Rob Hosking (2.2), Claire Trevett (2.1) and Audrey Young (1.9) in terms of a higher Nat rating. Those with a higher average Labour rating are Gordon Campbell (4.0), Brent Edwards (3.5), Jon Hartezelt (3.1), Marie McNicholas (2.5) and Liz Banas (2.3).

These are the top ten by Third Party respondents. 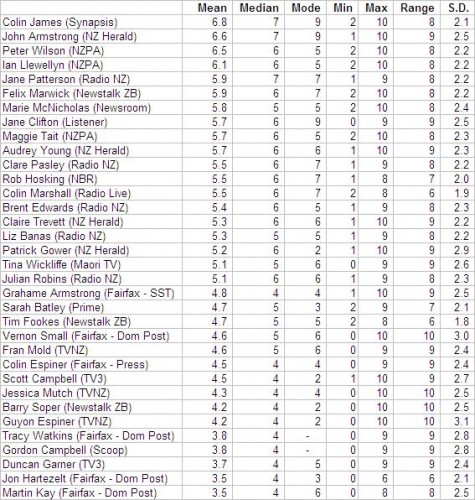 These are the full ratings, for topline data. 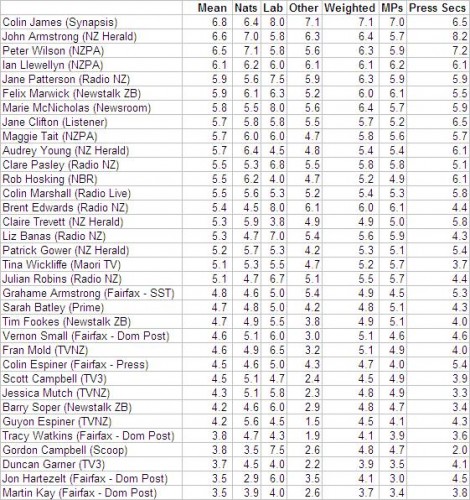 And the full breakdown by party and type of respondent.

Many thanks to the respondents.