I now have a copy of the full TV3 poll results, and have blogged them at curiablog. 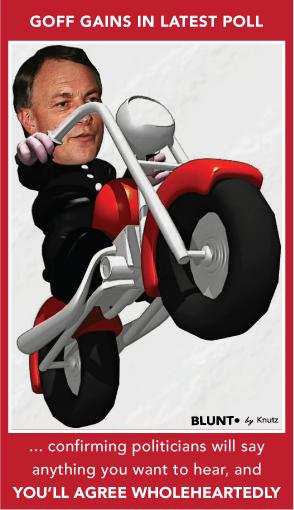 This Blunt cartoon is in line with most of the media analysis.

However while the poll certainly shows movements of some significance, I think most of the commentary has been somewhat over-excited – especially tying it to the nationhood speech. The poll is more about a drop in support for National and John Key (and over two months) than a payoff from the nationhood speech for Phil Goff. A few things to look at:

Now this doesn’t mean it was good news for National. The poll is not so much about Labour or Goff going up – it was about National and Key dropping over the last two months (not last two weeks). Changes for Key are:

This reflects I think the unpopularity (on both the left and right) of elements of the ETS, and coverage of other unpopular issues (perks, Hone Harawira saga).

So again while the poll does show some significant movement, most of the media are analysing it wrongly in showing a “pay off” for Phil Goff for his nationhood speech. The poll is quite consistent with the mid to late November polls in other media, and the two month gap makes it unsafe to tie to one more recent event. 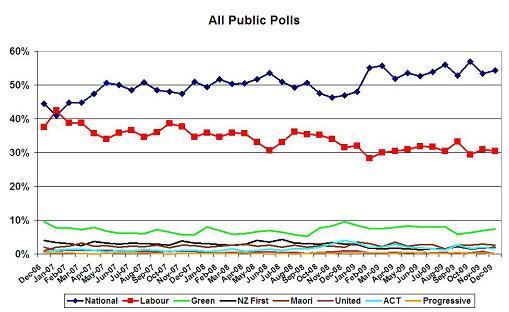 This graph puts the polls in context. This TV3 poll was in fact better than the three previous polls in November, so the average gas has increased.