It’s been a playful week, as I also was at the theatre on Saturday night also – this time seeing Robin Hood the Pantomime, in Circa 1.

My God, it was great fun. I had forgotten how hilarious a good pantomime is – and one by Roger Hall especially. Hall remains our king of the theatre.

The pantomime is great viewing for all ages. The kids love it, and they even get to go up on stage for a bit. But adults, parents and grand parents can all equally enjoy it, as it works into the script mounds of adult humour.

Wellingtonians will love how Robin Hood has been localised – Sherwood Forest has become Zealandia, and the town square is Civic Square. 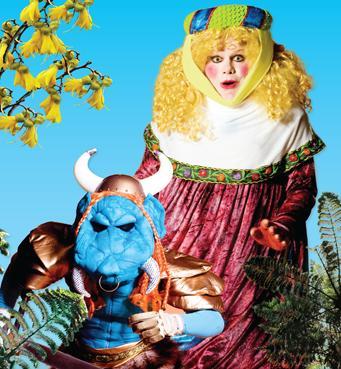 There is a cast of eight. The star for me was Gavin Rutherford who plays Robin Hood’s mother – Mrs Hood – pictured above. Mrs Hood acts as the effective narrator and keeps you in non stop laughter with her antics.

Kali Kopae played a petite and immaculate Maid Marion. She had a wonderful singing voice (I later found out she was a finalist in NZ Idol), and was almost as good an archer as Robin.

I have to also mention John Wraight for his Little John character. Wraight has a wonderfully expressive face which lights up the stage as he sings. He also triples as the Abbott and King John.

There were lots of political and current affairs references. The husband of one character had been sent off to fight for the Crusaders. The wife remarked she was disappointed it wasn’t the Crusades, as then he would have got more air points than Chris Carter.

I was amused that evil Prince John turned out to be John Key, and the Sheriff of Nottingham Rodney Hyde (with a y). I texted Rodney at half time to tell him of his fortune. The peasants were unhappy with the Greedy Sheriff Tax increase. The play wasn’t party political – I think whoever was in Government would have ended up as the Sheriff.

The blue creature is Thor the Viking. He doesn’t appear in the classical version, but does a good job as Rodney’s rather dim bodyguard.

I must make mention of the talented musical director Michael Nicholas Williams. He provided great music and singing throughout the show, and was instrumental to is success.

I almost forgot the three Crows. The play actually starts with two Crows, and much laughter as we hear one is called Russell and one called Martin. Later they are joined by a female crow – Sheryl Crow. It’s all very silly yet funny.

I didn’t think Robin Hood would work well as a pantomime, but it worked brilliantly. I had a smile on my face for the entire two hours, and was disappointed when it finally ended.

If you have young kids, take them to see this – they’ll love it. But again, this is not just for the kids – most of the audience were adults there by themselves, and I suspect we actually got more laughs out of it than the kids. The only requirement is that you have to be prepared to “Kaw Kaw” when a baddie appears on stage (to warn Robin) and have fun.