Went to Aladdin, a pantomime by Roger Hall, at Circa on Sunday afternoon with Auckland Girl.

Once again the star of the show is Gavin Rutherford, who seems to specialise in dressing up as sex starved middle aged woman, and yes that is a compliment. He excelled as Widow Twankey who runs a laundrey with Hanky and Panky. her son is Aladdin.

Aladdin wants to marry Princess Jasmine, but the evil Abanazar also covets her, and it is a crime for anyone to view her unless they marry her, and to marry her you need to be very wealthy.

Nick Dunbar makes a marvelous villain as Abanazar and also doubles as the Sultan. His sidekick is the demon Kebab. 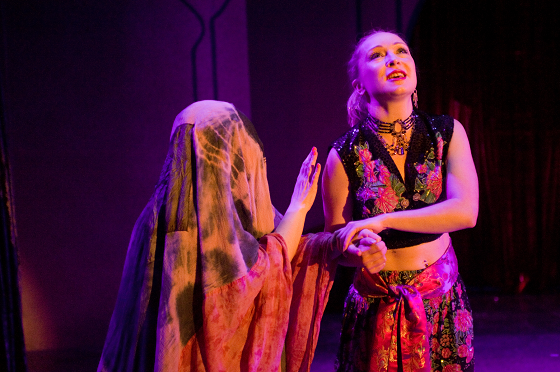 Jessica Robinson fits the role of the beautiful Princess Jasmine, and has a wonderfully strong singing voice.

A surprise highlight though was the genie, played by Lyndee-Jane Rutherford. She is basically a Jewish genie, and it is comic genius. The accent is wonderful.

As usual, Michael Nicholas-Williams provides excellent music, and the fourth wall to him is broken a couple of times to good comic effect.

The play was non-stop laughs, and great audience interaction. Sit in the front row at your peril. And no matter where you sit, you’ll be helping chant “Oh yes it is”. And the kiddies get to go up on stage for one of the routines. It’s all great fun for people of any age.

Two minor issues. The total time at 2 hours 10 may be a bit challenging for very young kids. Personally I was fine with it, as there was plenty of laughs and action, but with the interval allow two and a half hours. The second issue was that at first it reminded me a bit too much of last year’s panty – Robin Hood. I guess this was natural with many of the cast the same, and the same director. To be fair, the similarities were just in the initial stages, and as it developed it formed its own special feel.

Definitely highly recommended as a fun show, for old and young.