The panel/studio worm has been pretty consistent all night. If Phil Goff says anything it goes up. I joked on Twitter that Goff could confess to the Crewe murders and the panel worm would go up.

I wondered why, as this was meant to be a panel of undecided voters.

Then I saw this tweet from John Kingi, about being a worm panelist. A couple of friends of his seem to be there also.

Now John Kingi is a vocal Labour Party activist. He is about as undecided a voter as Phil Goff is.

TV3 have had their panel infiltrated by one or more Labour activists. Either TV3 failed to ask people if they were genuinely undecided voters, or they were lied to. I hope the media investigate this thorougly before reporting on the results of the worm.

UPDATE: And looks like a second panelist is a Labour voter – see here.

UPDATE2: I have a report of a third panel member (and remember there were only 65 and they are meant to all be undecided) who tutors at Auck Uni politics and has publicly declared she is a Green voter and supporter.

UPDATE3: And we have a third Labour person identified. There may be a fourth. 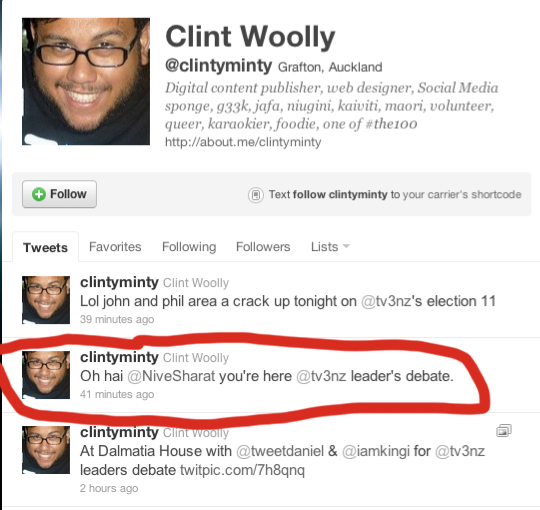 So also Nive Sharat there, and if we check her out.

This is a major credibility blow to the panel/studio worm.

UPDATE: John Kingi phoned and e-mailed me to say that he in no way misrepresented himself to those selecting the panel, and I take him at his word. His e-mail:

In regards to your post on Kiwiblog, it is implied that myself, amongst others, somehow “inflitrated” the TV3 panel. This is simply not true. I have not been a Labour Party member for some time, and the page you linked from Grassroots Labour was one I haven’t seen or used in over two years. The picture you paint is not an accurate reflection of my current political position. The questions raised in the selection of the panel included:

Who did you vote for at the last election? My answer: Labour

Who do you plan to vote for at this election? My answer: Undecided, but definitely on the centre left.

Amongst other gender/age/electorate questions. I at no point lied about my political positions or intentions and I gave Key and Goff equal treatment in my response to the debate. In fact I even voted that Key actually won the debate in my view at the end! I hope that with the full facts established, you can clarify on your blog.

I chatted with John and he also confirmed to me that he was not undecided between a centre-right and centre-left party, but between parties of the centre-left. I do not believe this is how the panel was sold. As I said before the debate even begun they would have been better to use “swinging” voters, ie those who have previously voted both CL and CR.

I understand Clint Woolly has also said he is undecided, however it is his own tweet where he describes himself as a Labour voter.

Back to John, I stand my my point that I don’t think someone who was so passionate about their political beliefs that until recently they were an activist for political party, is suitable to be a panelists of “undecided voters”. Take the photo below of John: 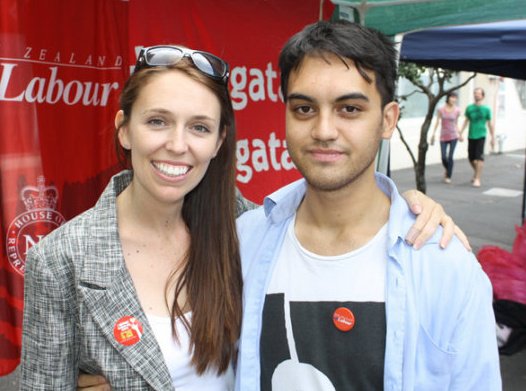 This is obviously taken since the last election, and I suspect since Jacinda moved to Auckland which makes it even more recent. I don’t think having once been a political activist for a political party means you can never be seen as “undecided”, even decades later. But at a minimum I don’t regard such activism (and membership) within the same parliamentary term as being compatible with being on a panel which is portrayed to the public as “undecided voters”. I once voted Labour, but that doesn’t make me a swinging voter.