Greatly enjoyed the opening night of Our Man in Havana at Circa on Saturday night. The play runs until Saturday 26 March.

The play is adapted from the book of the same name, by the great novelist Graham Greene. Greene wrote many good spy novels, and it turned out that during this time he was in fact an agent for M16. Kim Philby was his supervisor at one stage.

The book, and the play, are about a vacuum cleaner salesman who is recruited by the British Secret Service to spy for them. He has no intelligence to report, so he starts to invent informants and intelligence. He even sends back photos of vacuum cleaner parts, declaring them to be weapons of mass destruction. Note the WMD term is actually used by Greene, and this was in the pre-Castro Cuba.

Greene got the inspiration for his book from Joan Pujol Garcia, a Spaniard who was a double agent in WWII for the British and the Germans. He supplied masses of disinformation to the Germans, based on a fictitious network of seven agents and 19 sub-agents. He got an MBE from the British for his services, but ironically after the war ran into one of his German handlers who gave him the Iron Cross for his work.  They never realised he duped them.

Anyway enough about the novel, how was the Circa play? 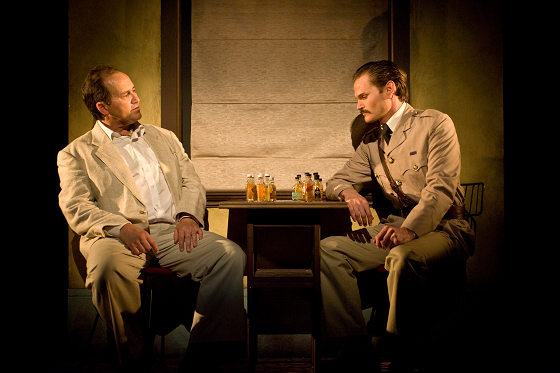 I thought the play was a smashing good time. The four actors played 31 parts between them, plus they all took a turn as the narrator. The quick fire costume changes were done wonderfully, and the humour was infectious.

Jeff Kingsford-Brown played the lead of Wormold, but also the MI6 chief. His performance was excellent, and he was the glue of the show.

John Wraight’s main role was as Hawthorne, who recruits Wormold. Wraight has a very expressive face (he was superb in the Robin Hood pantomime), and he’s a natural on the stage.

Simon Vincent played a total of 14 roles from the Manuel-like Lopez to The Queen. His appearance as The Queen was almost painfully funny.

The photo above (taken by Stephen A’Court) shows a checkers game between Wormold and the Policeman Segura. Everytime you took a checker, you drank the bottle. I must try that game at some stage. The idea of course was to get Segura drunk so he could steal his gun.

I found the play very enjoyable, something most adults could enjoy. The first half was a bit slow to get moving, but the second half was action packed as events moved to a climax. Well worth seeing.