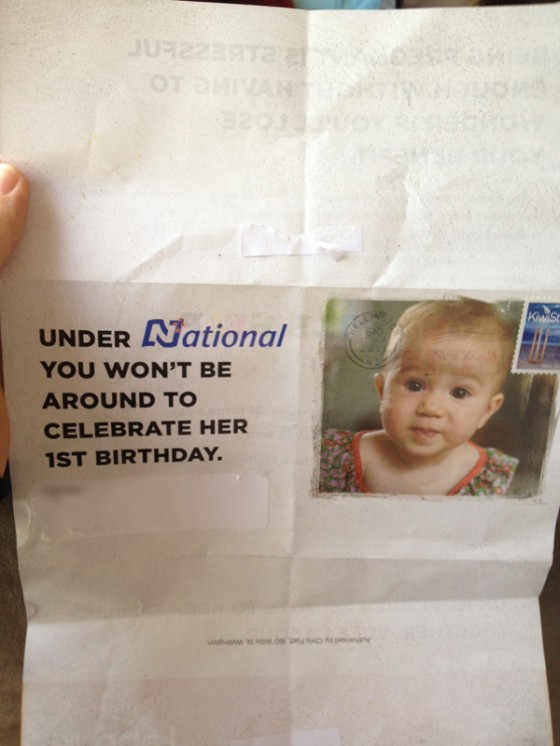 I thought Labour would never stoop lower than their 2005 campaign when they wrote to state house tenants and told them National would sell and evict them from their state houses. Never mind that National’s policy was that you can only sell a state house to its existing tenants.

But this really takes the cake. It is hugely insulting to the hundreds of thousands of mothers who are not on benefits and do work, because it is equating a work test obligation (which only applies if you are a sole parent who has a second child on the benefit) with not being around to celebrate a birthday.  How denigrating to working mothers. The second page has the slogan “Vote to keep families together, Vote Labour”. So Labour regards having working parents as child abandonment now.

Also the shock tactics where it looks like National’s policy is to kill off parents, with the phrase “you won’t be around to celebrate her first birthday”. It really is vile grubby stuff.

Whale has the full letter. The unanswered question is if Labour is sending these to parents of new borns, how did it get this info?

UPDATE: Stuff now has a story on these, with Grant Robertson defending them. Good to know Labour will resort to tactics like this to try and preserve a welfare system where someone can remain on the DPB for 20+ years and never face work testing.