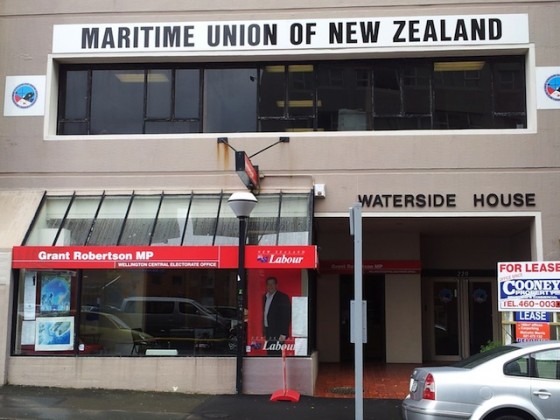 Whale has this photo sent in by a reader. MUNZ receives $285,000 rent for space in their building.It is unknown how much comes from the electorate office rental.

MUNZ only has 2,580 members today. Doing pretty well to own their own building. Of course it helps if you have Labour MPs having the taxpayer pay rent on their behalf.

However despite their good intentions, I think it is time to put in place a ban, so that unions and parties do not get this backdoor funding. The latest review of parliamentary spending recommended:

That MPs entering Parliament from the next general election not be able to receive public funding for out-of-Parliament offices owned by an MP or an interested party. The funding for premises owned directly or indirectly by current MPs should be grand-parented while the MP continues in Parliament.

MUNZ is affiliated to the Labour Party and should be seen as an interested party.

Another alternative to a ban, is my suggestion to have the rent set at say 66% or 75% of the market rate, so that the party or union or MP is not seen to be benefiting from the arrangement.