The last Arthur Miller play I saw was at school – the famous Death of a Salesman.

All My Sons was actually written two years prior, in 1947. It is the play that established Miller as a world class playwright. After having seen so many modern plays, it was refreshing to go to an old classic which is purely about the acting, the set and the script. 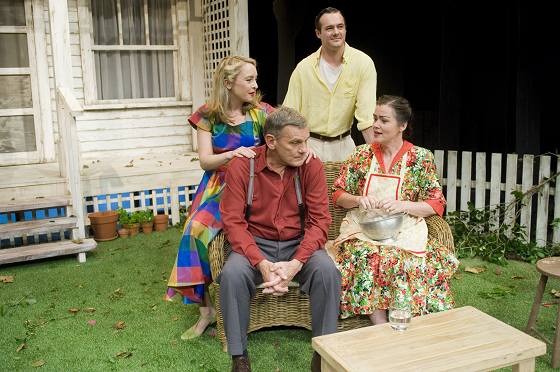 The play is about terrible family secrets. There are ten characters, four of whom are major and six minor. At the heart of the play is Joe and Kate Keller. Joe’s company manufactured some faulty cylinder heads during WWII, which led to the death of 21 pilots. Joe was exonerated, while his business partner and former neighbour Steve Deever was found culpable and remains in prison.

Steve’s daughter, Ann, was engaged to Larry Keller who went MIA over three years ago. She plans to marry his brother Chris Keller.

The tension really starts when Ann’s brother George turns up, now believing his father is innocent and wanting to confront the Kellers about whether he was a fall guy for Joe.

Jeffrey Thomas dominates the play with his portrayal of Joe Keller. Even though you are suspicious of him, you just can not help but like him. He gets you on his side, and you want him just to be happy. Thomas portrays well the moral complexity of his character.

The other star was Emma Kinane playing Kate Thomas. She gets it pitch perfect in teh scene where an angry George is wanting to destroy her family, and she just mothers all the anger out of him by telling him how he looks too skinny, how he needs to eat more, suggesting nice local girls he could go out with. It is a magic performance as you realise that no one could stay angry at such a lovely caring woman. But Kate also has her secrets – and she refuses to believe her son Larry is dead.

Jessica Williams and Richard Dey play the hopeful couple Ann and Chris. They have to put up with a both Kate and George not wanting them to marry. Kate also faces a titanic struggle between loyalty to her family, and to Chris and his family.

The play runs for two and half hours – considerably longer than my normal attention span. But not only did I not notice the time, I was on the edge of my seat for the entire second half of the play as events unfolded. You could have heard a pin drop, the audience were so captivated.

The stage is also worth of mention. A wonderful replica of the backside of a 1940s house, and the back lawn. The artificial grass actually went all the way to the first row of seats, which made you feel very close to the action.  The costumes were also spot on, especially the frocks for the ladies.

I went along with Stats Girl, the Ginger Ninja and Chef Girl and all four of us raved about the play. You understand why it has been a success for over 60 years, and the Circa performance of it was first class. I would recommend it without hesitation to anyone who likes an old fashioned drama. It will keep you captivated, and deliver a worthy inevitable yet shocking ending.

There is also a review at Theatrereview, which gets into some of the themes running through the play.