Flowers from my Mother’s Garden is effectively the prequel to Biography of My Skin, which I saw in October 2009, also at Downstage. 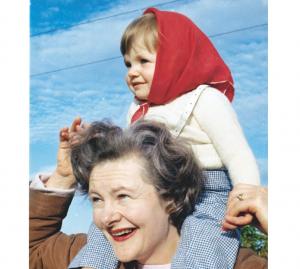 The biographical format relies strongly on the quality of the actors to make it happen, and both Harcourts excelled – which is no surprise.

Unusually, Miranda is already on stage as you enter the theatre. She is busy sorting through her slide collection as people take their seats, and the slide projector is a prominent part of the performance.

I thought the play would mainly focus on the Miranda and Kate relationship. There was a hilarious audio clip of Miranda being an annoying five year old, and being told off. But the real highlights were learning more about Kate’s parents and families.

Most of the performance had you smiling or laughing. There were a few very raw moments. You saw a lovely photo of Kate as a four or five year old, with three slightly older (say six years old) boys – one with his arm around her. You smile as she tells you he went on to be in love with her sister. Then when she says all three boys died in WWII, you feel a but numb – despite the fact it all happened 70 years ago. It was just so sad, seeing the photo of  them as kids and realising they never got much past 20. Later on we saw a photo of him in uniform, and heard how Kate happened to come across his name amongst the 10,000 or so inscribed at the Runnymede memorial (which I have visited).

The other raw moment was at the end as the death of Kate’s husband and Miranda’s father occurs. When the play is biographical, not fictional, and the actors are playing themselves, there is something very intimate and real about it. I think this is one of the reasons this genre has become so popular.

Whole both Glee Girl and I enjoyed the show greatly, I did find it not quite as engaging as Biography of My Skin. The stories in Skin were often shaking with laughter funny, and you had less idea of where it was all going (which was good). As a prequel, Flowers was a bit more predictable.

However that is not to say it wasn’t still a greatly enjoyable play. Seeing the two Harcourts perform together was a rare treat, and the direction and props all combined to make it a great experience. There was an excellent blending of audio, pictures and dialogue.

It runs at Downstage until 29 September. A great opportunity to see two of New Zealand’s finest actors tell their story.