I went to the premier of Miranda Harcourt’s Biography of My Skin at Downstage last night. It was (largely) a one woman show about Miranda’s life, but written by her husband.

I was a bit apprehensive going into the play, as I wasn’t sure if I would like it. I tend to prefer plays with character interactions, with a plot, with surprises. I was not sure that I would find anything interesting or amusing about the life of a actress as seen by her husband, and would have to write a review about how it was boring tripe (I get free tickets for the purpose of review).

I needn’t have worried. It was superb. I loved it. Most of all I had forgotten what a wonderfully talented actress Harcourt is. There is such a difference between an actor or actress who is good, and those who are great. Harcourt’s voice and presence dominated the stage. Not everyone can do a one person show, but she definitely can. 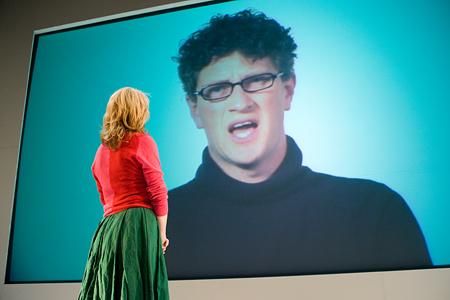 Miranda is not quite alone on stage. We see video interjections of various friends and families, and I also advise people to keep an eye on the suitcase. It is not just a prop!

At times the play is very poignant, as we see photos of her father dying of cancer, and spreading his ashes. Even sad moments can turn humourous though as Harcourt tells the tale of trying to get the Karori Cemetery to cremate her son’s (named Peter after he father) placenta to mix it in with his ashes. You want to both laugh and cry. And I won’t even tell you my reaction at the video of her giving birth via c-section. But it all forms part of a memorable play.

At the heart of the play is the love story between Miranda and her husband Stuart McKenzie. It is never soppy, and often hilarious. The highlight must have been her reciting of when a cop pulled Stuart over for driving without his seatbelt on. By the time the cop got to the car, the seatbelt was on, and the offence was denied. And then the cop asked Miranda if he had been wearing it, and she told the truth. She gets evicted from the car, as he tells the kids in the back seat (including the one month old) that Mummy has to walk home as she had been bad.

I hope readers forgive the spoiler, but it gives a great example of the play. We also hear about her younger days when her and a friend would rob a bar by having one of them make out with the barman, while the other helped themselves.

The play is called Biography of My Skin, and you do get to see a fair bit of Miranda’s skin, as she changes outfits on stage. I think Miranda is around 47 years old, but let me tell you her body was the envy of every woman in the audience aged over the age of 25, and the admiration of every man aged over 16! She is a stunning beauty.

A moving part of the play was by coincidence very topical. It was about the guilt when Steve Williams killed step daughter Coral Burrows in the Wairarapa in a manner not dissimiliar to a film they produced, in which he had been an extra. Williams killed her after he had been up all night smoking P.

The play runs at Downstage until the 31st of October. I found it a great night out, and from the audience reaction so did everyone else.