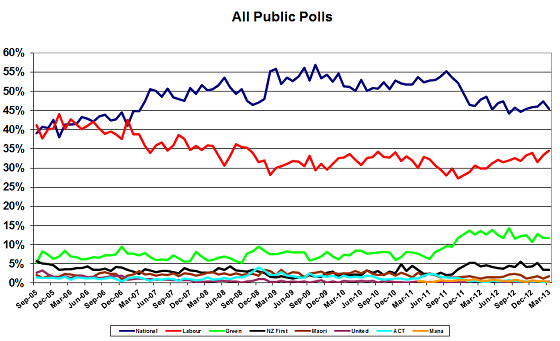 Curia’s monthly newsletter is out. The executive summary is:

The average of the public polls has National 11% ahead of Labour – 3% less than in  February. The seat projection is centre-right 58 seats, centre-left 60.

Australia has Labor and Gillard’s ratings seriously tanking.  The Coalition has a two party preferred lead of 16% to 18%, and is projected to win three times as many seats as Labor in the September election. Gillard has only 26% positive approval and 65% negative.

In the United States Barack Obama’s approval rating is has dropped significantly by 7%.

In the UK the Conservatives are still 11% behind Labour and the UK Independence Party is now polling at the same level as the Liberal Democrats.

In Canada the Conservatives are on 31%, NDP 28% and Liberals 27%. Likely Liberal Leader Justin Trudeau is already leading the Preferred PM polls.

The normal two tables are provided comparing the country direction sentiment and head of government approval sentiment for the five countries. New Zealand continues to top both by considerable margins.

This newsletter is normally only available by e-mail.  If you would like to receive future issues, please e- go to http://listserver.actrix.co.nz/cgi-bin/mailman/listinfo/polling-newsletter to subscribe yourself.