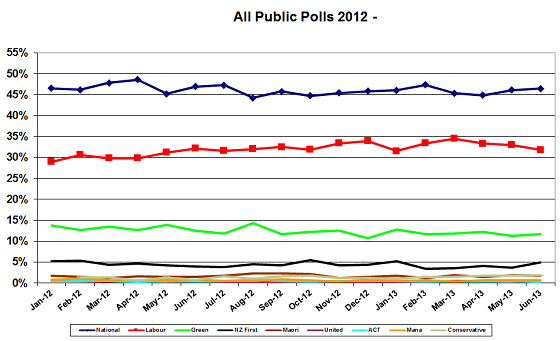 Have just published Curia’s monthly newsletter summarising the public polls in NZ, Australia, UK, US and Canada. Note Labour have dropped for three months in a row.

The executive summary is:

The average of the public polls has National 15% ahead of Labour – 2% more than in May. The seat projection is centre-right 62 seats, centre-left 57.

The return of Kevin Rudd in Australia has seen Labor rebound in the polls, so far, but the Coalition retains a narrow 2% lead on average.

In the United States President Obama’s approval rating slips, and he gets a negative rating on foreign policy for the first time.

In the UK Labour leads the Conservatives by 8% and the UKIP continues to outpoll the Liberal Democrats.

In Canada the honeymoon has ended quickly for new Liberal Leader Justin Trudeau, as they drop 5%. However on current polls they would still be the biggest party and lead a minority government.

The normal two tables are provided comparing the country direction sentiment and head of government approval sentiment for the five countries. The mood has improved in Australia and Canada.

We also carry details of polls in New Zealand on Maori names, Labour and National leadership, the GCSB, Sky City, Fluoride, Fiordland plus the normal business and consumer confidence polls.