I’ve just watched the Q & A section on the Labour-Greens power policy, in which Susan Wood agonised over the massive financial destruction the announcement visited on all the ordinary New Zealanders who have investments in KiwiSaver (and, indirectly, in the Cullen Fund and ACC), so have lost hundreds of millions of dollars over the last week because of the massive market crash.

This is a talking point the government’s shills have been throwing around all week – Hooton claimed the total loss was in the ‘billions’ on National Radio – so I thought I’d take a look and see how the NXZ has actually been performing recently. The red line is April 18th, the day Labour and the Greens launched their announcement. 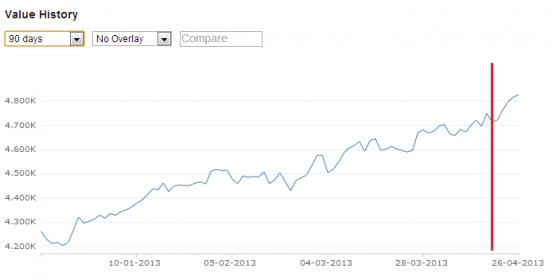 I’m amazed Danyl is trying to argue that as the overall sharemarket is up, then the destruction of value in some companies doesn’t matter.

To use an analogy, it is like someone going into your street and burning your house down, but then telling you not to complain about it because the value of the rest of the street has risen.

Yes the NZX is up.That is because global investors are buying shares in Xero like it is the next Google. Now that is great for Xero shareholders like myself. It isn’t much use however to the person who only has shares in Contact Energy.

Having said that there seems to be a growing consensus that the Greens and Labour policy will never be implemented, even if they win the election. NBR reports:

The Woodward report makes no calculation for the impact of the Labour-Greens policy on MRP’s profits, but considers “the likelihood of occurrence to be low”, in part because the policy would be complex to implement and likely to face court challenges.

I think they are correct. At the end of the day I just don’t think the Government can effectively nationalise 14 power companies.