Stayed on Tuesday night in Virginia, around 30 miles from DC at the Bull Run Regional Park. It is the closest park to the Cruise America depot where we dropped the RC off on Wednesday morning. Then headed into DC. 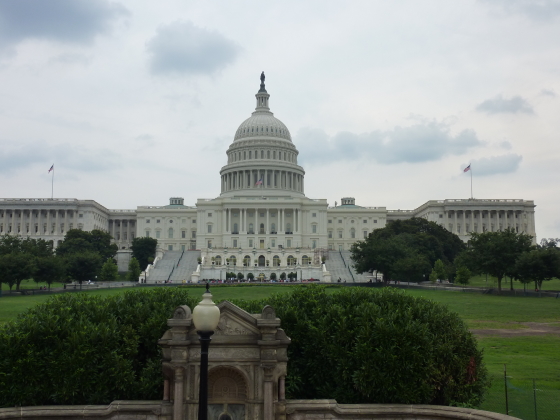 I’ve been here a few times before, but this was the first visit for Auckland Girl, so we did the usual tour of the monuments. Staying at the Hotel George by Union Station, so first sight was of course the US Capitol. An iconic sight. 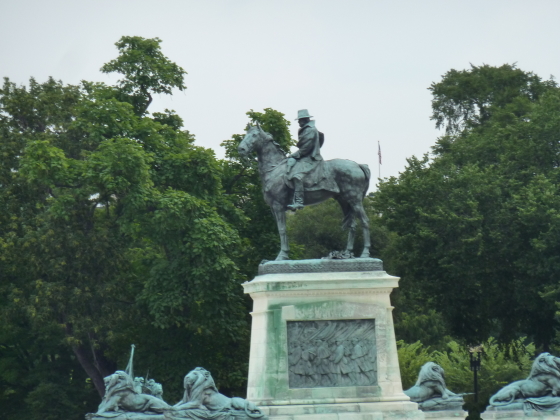 The statue is of US Civil War General and later President Ulysses Grant. He faces the statue of Lincoln, with the two allies gazing at each other.

In one sense the opposite to what they had in Monticello, where strangely Jefferson had a bust of  Alexander Hamilton, his arch-nemesis. The guide explained that he had it opposite his own bust to demonstrate they would be enemies for eternity. 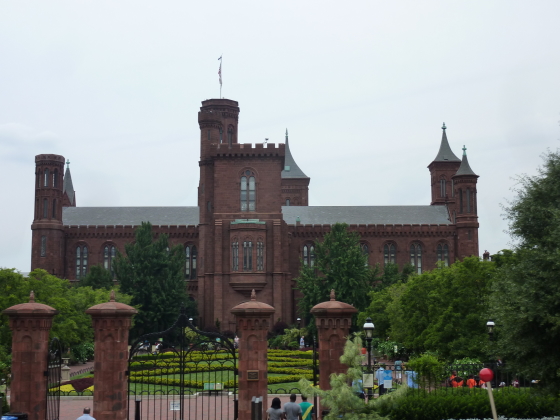 I’ve never been to any of the Smithsonian museums, including this one (the Smithsonian Castle). There are 19 of them in DC, and all free to view. I reckon I need a spare ten days to do them all! 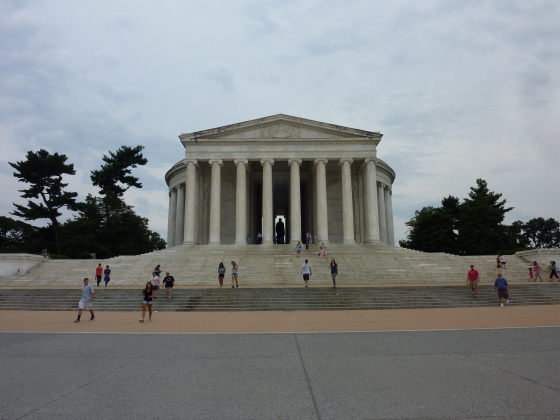 The Jefferson memorial from the edge of the water. I like how you can see his huge statue between the pillars from afar. 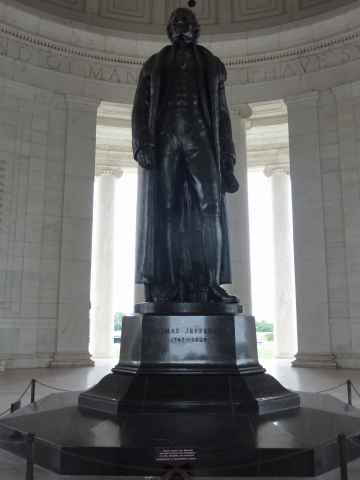 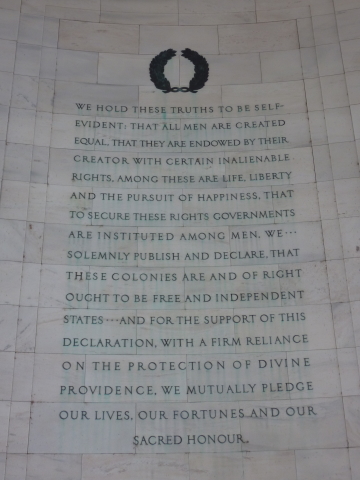 Parts of the Declaration of Independence, which he wrote. They left out my favourite part which is:

That to secure these rights, Governments are instituted among Men, deriving their just powers from the consent of the governed, That whenever any Form of Government becomes destructive of these ends, it is the Right of the People to alter or to abolish it, and to institute new Government, laying its foundation on such principles and organizing its powers in such form, as to them shall seem most likely to effect their Safety and Happiness. Prudence, indeed, will dictate that Governments long established should not be changed for light and transient causes; and accordingly all experience hath shewn, that mankind are more disposed to suffer, while evils are sufferable, than to right themselves by abolishing the forms to which they are accustomed. But when a long train of abuses and usurpations, pursuing invariably the same Object evinces a design to reduce them under absolute Despotism, it is their right, it is their duty, to throw off such Government, and to provide new Guards for their future security. 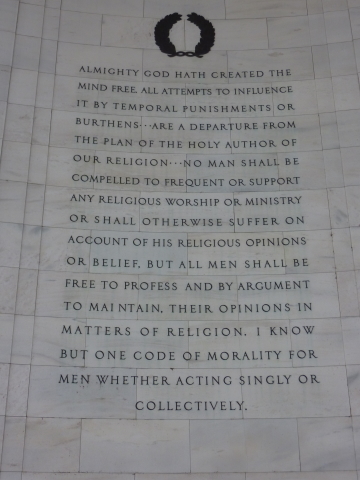 And great words on freedom of and from religion. 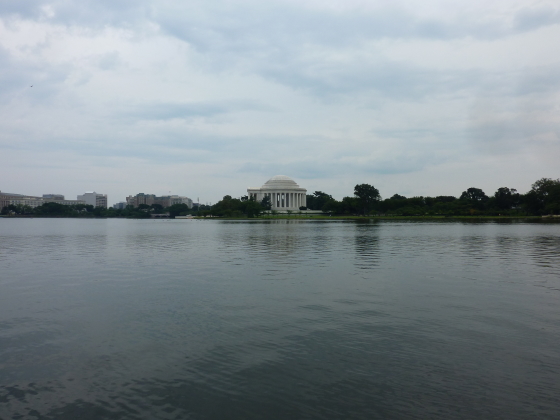 The memorial from the other side of the tidal basin. If you visit it make sure you look up at the roof to read “I have sworn upon the altar of God eternal hostility against every form of tyranny over the mind of man“. 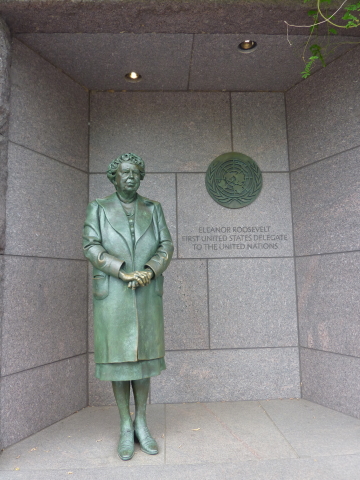 A statue of Eleanor Roosevelt, in the FDR Memorial, also by the tidal basin. She had a lot in common with FDR – they both had affairs with women 🙂 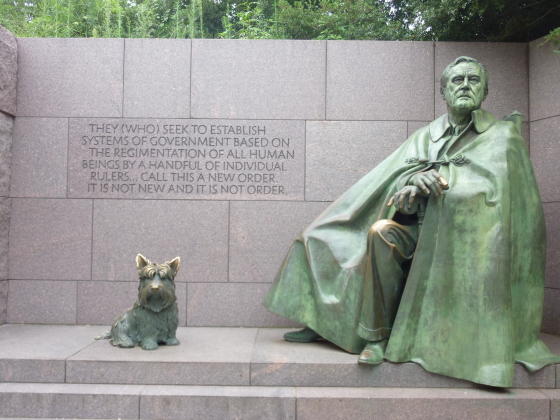 FDR and his dog Fala. 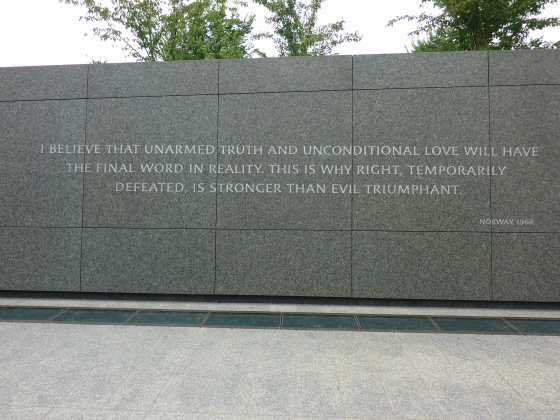 This quote is from Martin Luther King at his memorial. A good quote. 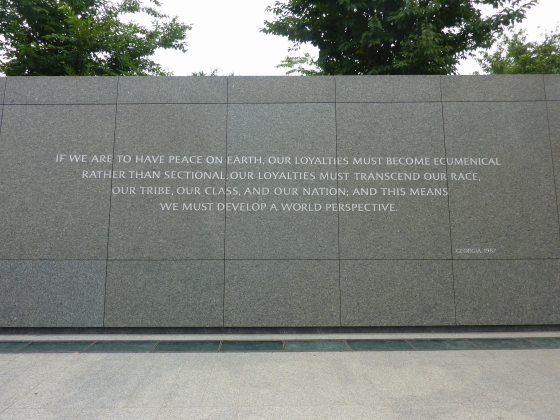 Also a good MLK quote – our loyalties should be global, as in all human beings – not divided up by nationality, race, tribe or class. 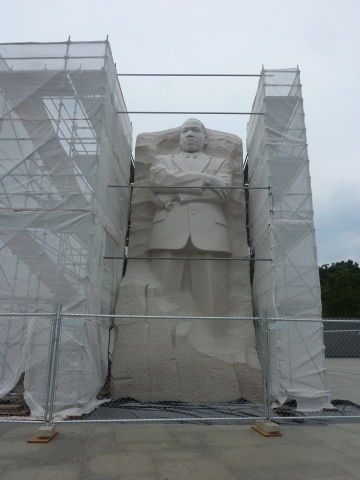 The MLK statue, with some work being done on it. 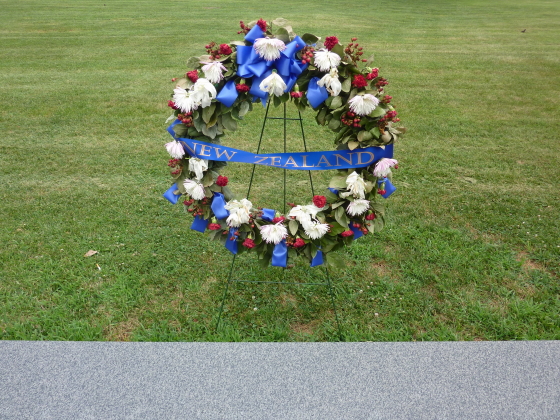 This is at the Korean War memorial – each country that participated  on the side of the UN forces has one. 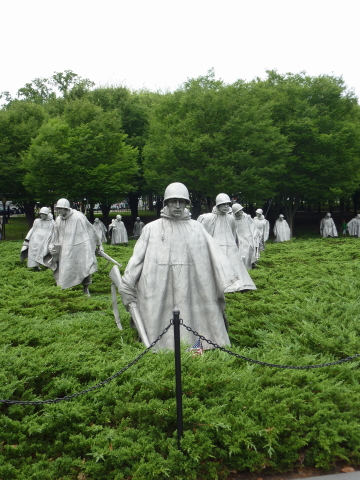 The Korean War memorial. So cleverly done – my favourite of the war memorials. 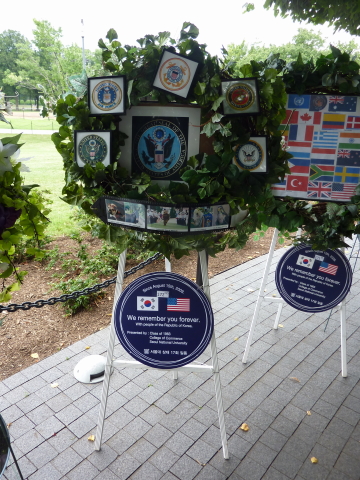 These are tributes from Korean groups who have visited. A nice reminder that if not for the US and UN involvement, they would all probably be slaves in North Korea. 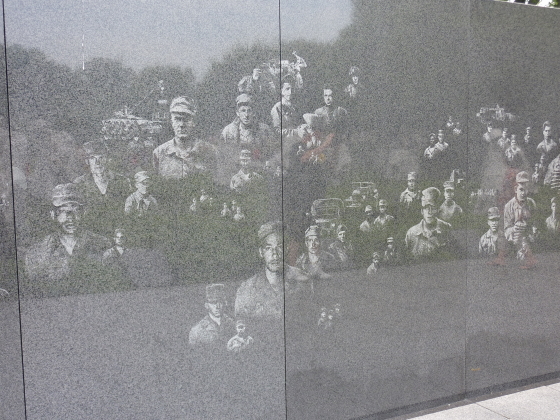 Also part of the Korean memorial. They have sandblasted on 2,500 images of troops. 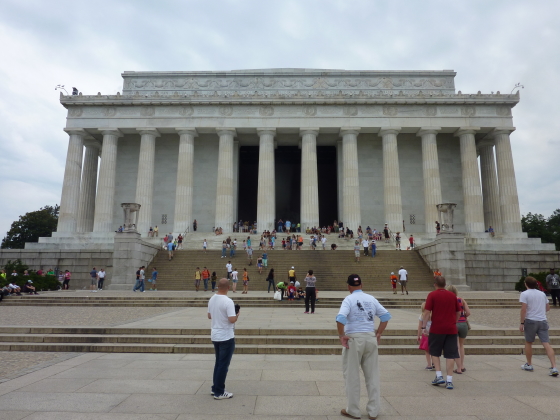 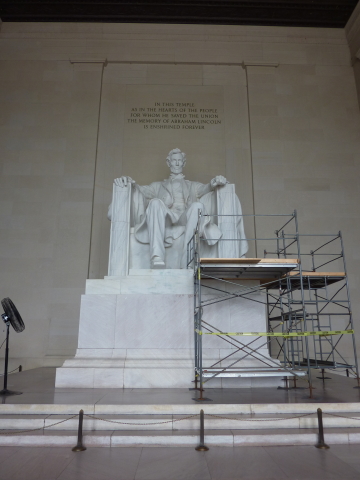 Lincoln himself – the man who saved the union. Most historians rate him the greatest US President. 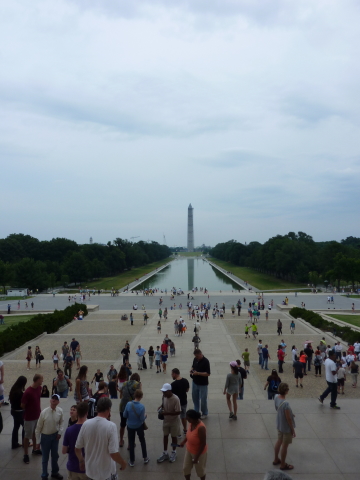 The Washington Monument as seen from the Lincoln Memorial, with reflection in the water. 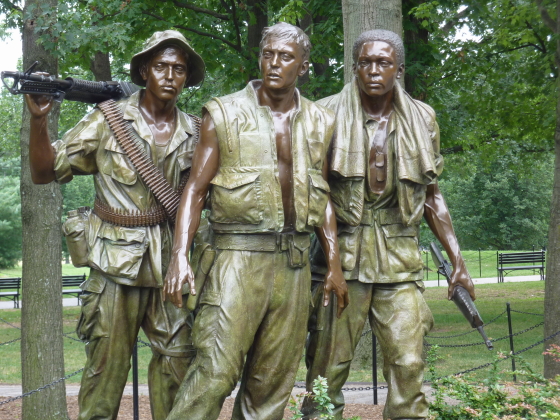 Part of the Vietnam War memorial. 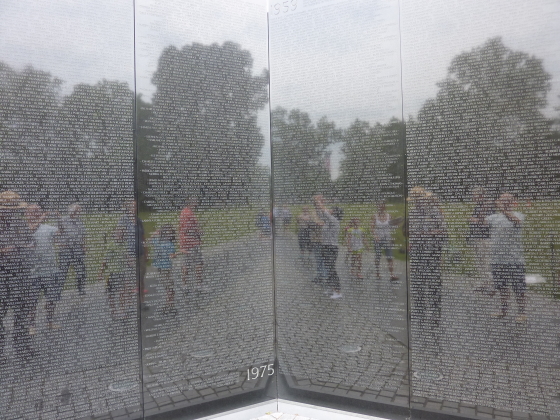 The main memorial has the names of around 59,000 troops who died inscribed on it. 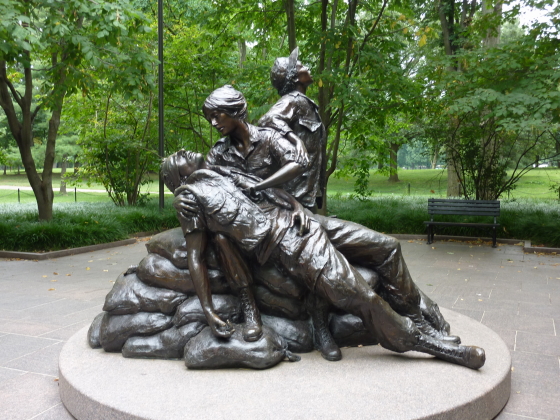 And this represents the women who served in Vietnam. 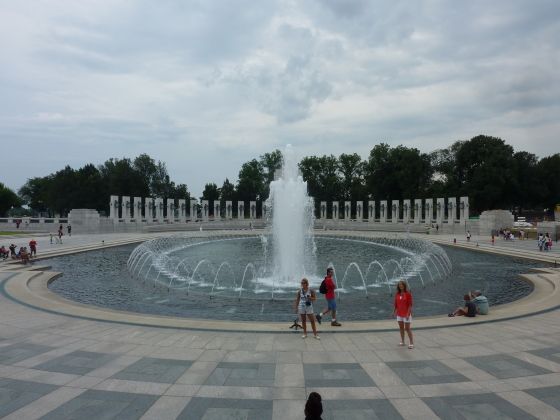 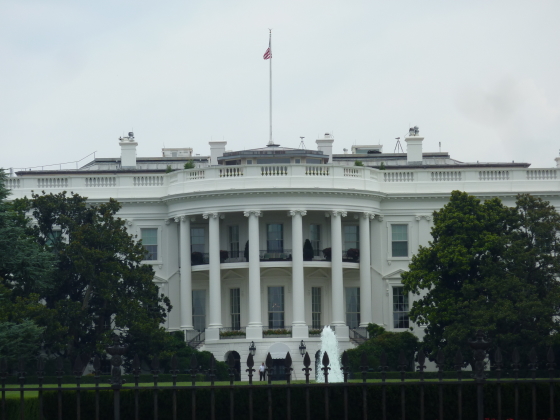 The White House, of course. 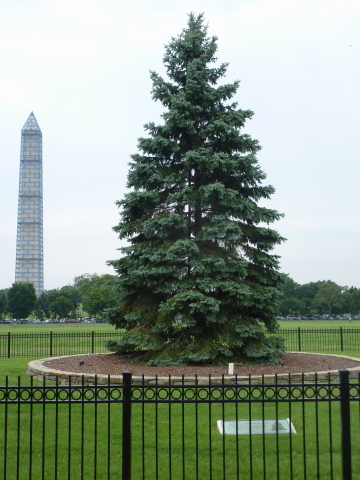