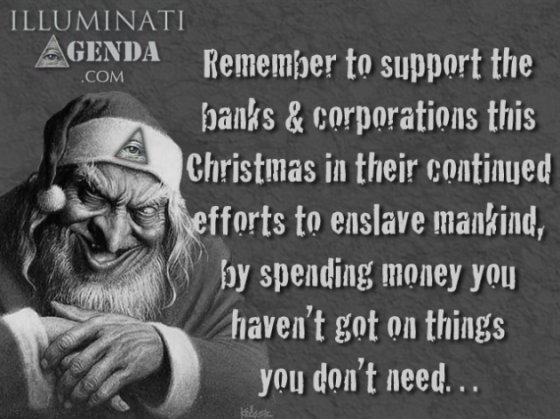 Martyn Bradbury posted the above image on his union funded and supported website. The URL wasn’t on it (he has deleted the original – this version is from Whale Oil). It is a very obvious anti-semitic image, and this was pointed out to him on Twitter by Giovani Tiso and Russell Brown. They did not say Bradbury was anti-semitic – they said that the image was and Tiso even said he assumed Bradbury was ignorant of its use on anti-semitic sites.. They asked him to remove it.

He then stuck up a post attacking them, comparing them to the Israeli Defence Forces etc.  He refused to show the original image, and stuck up a partial image that didn’t show the “Father Christmas”.

Now I’m not too worried about a feud between those three gentlemen. They can all look after themselves. But what is of concern is the editorial policy of The Daily Blog. When Tiso responded with a comment saying he had never accused Bradbury of anti-semitism, Bradbury refused to publish the comment.

And when another commenter tried to back Tiso, that comment was also blocked. Neither comment was in any way abusive or could be judged to be inappropriate. They were censored because they dared to disagree with Bradbury. And to the contrary comments attacking Brown in very vicious language (saying he should have been born with a vagina) were allowed through.

Bradbury has been a guest lecturer or tutor at a journalism school. He often goes on about freedom of speech. It is very apparent that his idea of freedom of speech is speech that agrees with him.

As I said, I’m not too fussed over the issues itself of the image. The Little Pakeha has a good post setting it all out for those interested. And Bradbury has now apologised for his post attacking Tiso and Brown. What I want to draw attention to is that the moderation policy of The Daily Blog is based on whether or not Bradbury agrees with your views.

What is especially disturbing is that he would use the site to attack someone, and refuse to publish a very reasonable comment from them in response.  And this person is paraded before journalism students as someone they can learn from.