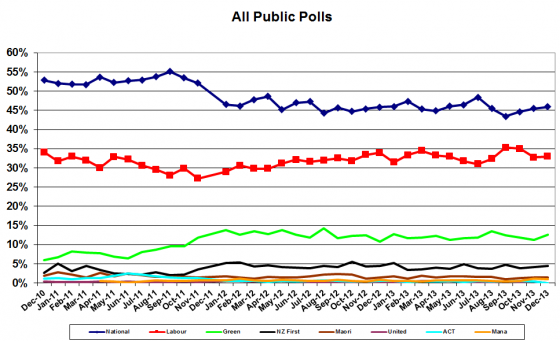 The latest polling update, for November and December 2013. National has had a good three months.

The summary of the newsletter is:

There were three polls in November and two in December.

The average of the public polls has National 13% ahead of Labour in November (was 10% in October) and also 13% in December. The current seat projection is centre-right 61 seats, centre-left 59.

Tony Abbott has the shortest honeymoon in recent history, with the Coalition already behind Labor and with a net negative approval rating in Australia.

In the United States President Obama’s approval rating is drops to an even further all-time low of 41%. The Republicans are now ahead of the Democrats on the generic House ballot as the Obamacare fiasco damages the President and his party.

In the UK Labour’ leads the Conservatives by just 5%.

In Canada the ongoing scandal in the Senate sees the Conservatives drop to 28%.

The normal two tables are provided comparing the country direction sentiment and head of government approval sentiment for the five countries. The mood in NZ is a net 27% higher than Australia and 69% higher than in the US. Key is the only leader with a positive approval rating (+30%).