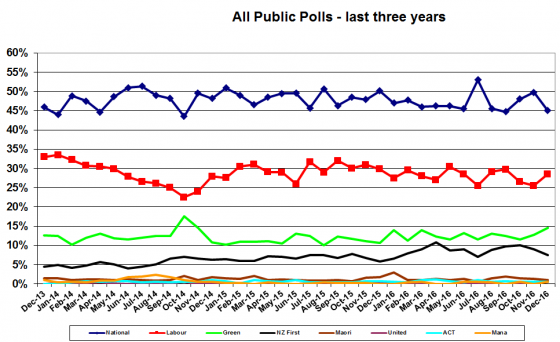 Note only one poll in December, so the average is of Roy Morgan only.

There was only one political voting poll in December 2016 – a Roy Morgan. This means the monthly average reflects that poll only.

The average of the public polls sees National 17% ahead of Labour in December, down 7% from November.

The current seat projection is centre-right 57 seats, centre-left 53 which would see NZ First hold the balance of power.

In the United States just before he is sworn in at the 45th President, Trump has a negative 6% favourability. No other recent President-Elect has had a negative favourability rating before they took office.

In Australia Pauline Hanson’s One Nation party is rising in the polls.

In Canada after a series of gaffes such as his praise for Fidel Castro, PM Trudeau’s approval rating has dropped by 14%, but is still a relatively strong +12%.

We also carry details of polls on National’s leadership, when the summer holidays should be plus the normal business and consumer confidence polls.