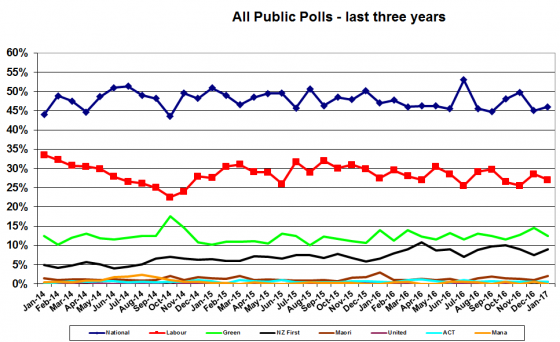 As you can see National is slightly higher than three years ago and Labour significantly lower. Greens much the same, and NZ First almost double.

The summary of the monthly newsletter is:

There was only one political voting poll in January 2017 – a Roy Morgan. This means the monthly average reflects that poll only.

The average of the public polls sees National 19% ahead of Labour in January, up 2% from December.

The current seat projection is centre-right 59 seats, centre-left 49 which would see The Maori Party hold the balance of power.

In the UK little change in the polls for the parties but they do show the Brexit plan proposed by Theresa May has widespread support.

In Australia the Coalition are now 6% behind Labor.

In Canada support for the Liberal Government and Trudeau continues to drop in the wake of a broken promise on electoral reform.

We also carry the normal business and consumer confidence polls.