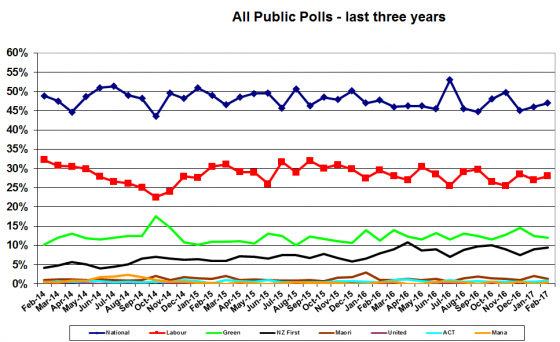 There were two political voting polls in February 2017 – a One News Colmar Brunton and a Roy Morgan.

The average of the public polls sees National 19% ahead of Labour in February, the same as in January.

The current seat projection is centre-right 59 seats, centre-left 49 which would see The Maori Party hold the balance of power.

In the UK Labour has fallen to 25% and Corbyn’s personal ratings remain very low.

In Australia Labor’s TPP lead over the Coalition has increased from 4% to 8%. Turnbull’s approval ratings have dropped further.

In Canada support for the Liberal Government and Trudeau continues to drop in the wake of a broken promise on electoral reform.

We also carry the normal business and consumer confidence polls.