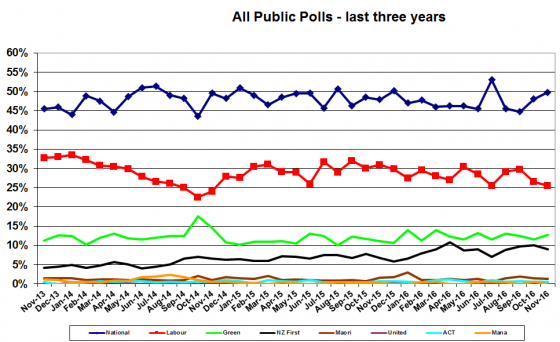 You can see above the average of the public polls over the last three years of the Key Government. National is polling 5% higher than the same time three years ago and Labour around 7% lower. No Prime Minister has ever retired in such a strong position.

The executive summary of the monthly newsletter is:

There were two political voting poll in November 2016 – a Roy Morgan and a One News Colmar Brunton.

The average of the public polls saw John Key leave office with National a massive 24% ahead of Labour in November, up 9% from October.

The current seat projection is centre-right 62 seats, centre-left 46 which would see a National-led Government with ACT and/or United Future.

In the United States Trump won the November election in a massive upset. Since then his favourability rating has increase by a net 18%. However, it is still slightly negative at -2%.

Obama is set to leave office with a respectable +11% approval rating.

In the UK the Conservatives remain dominant with a 15% lead over Labour.

In Australia the Coalition remain behind Labour and Turnbull’s approval rating remains low.

In Canada there is little change where almost two thirds say the country is heading in the right direction.

We also carry details of polls on Scott Watson, the economy, a foreign property tax, a plastic bag levy, the government surplus plus the normal business and consumer confidence polls.