Today was the hardest day but also the most magnificent. Before I touch on Day 9, I must mention the incredible conversation we had last night with the lodge owner at Tangnag. He has climbed to the summit of Mt Everest no less than seven times. He is on a “holiday” from climbing as he has an 11 month old baby. Was great to be able to chat to him about what it was like to climb Everest, and to help others get there.

Our guides has warned us today would be an early start but had refused to tell us exactly what that meant until the evening before. It turns out it means 4 am. Well up at 4 am, breakfast at 4.30 am, and out at 5 am. 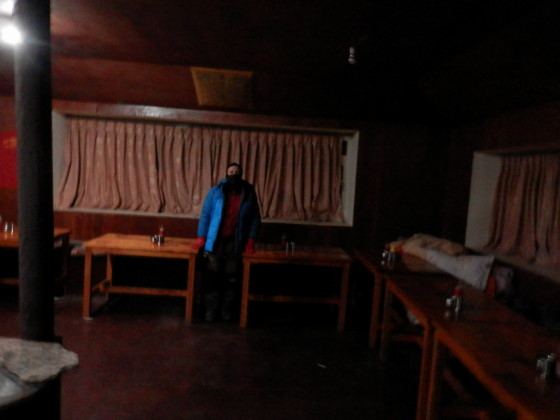 This is me in my full gear at 4.30 am. On the legs I had icebreaker thermal leggings, Kathmandu trousers and waterproof over-trousers on top of that.

I think you get the idea it was rather cold! 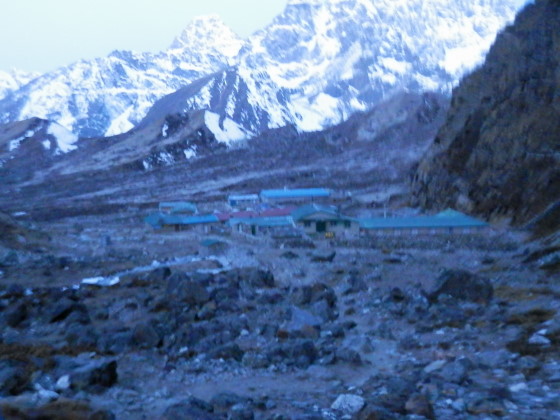 A view of Tangnag as we climb above it. 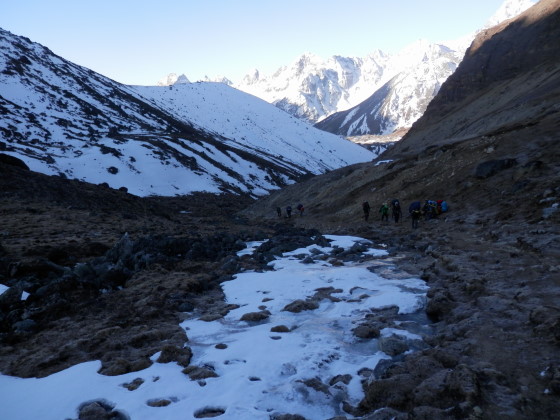 The first two hours is a moderate uphill trek. This is the view looking back. 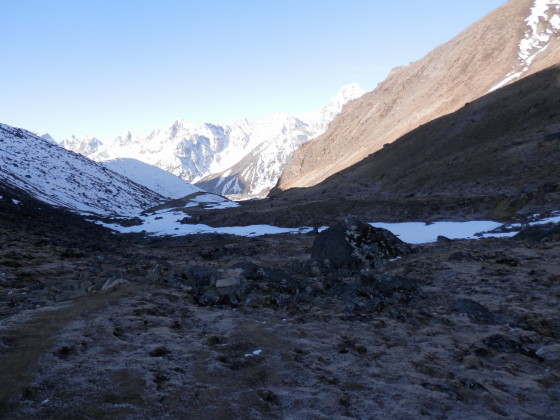 This is from the top of the first section. 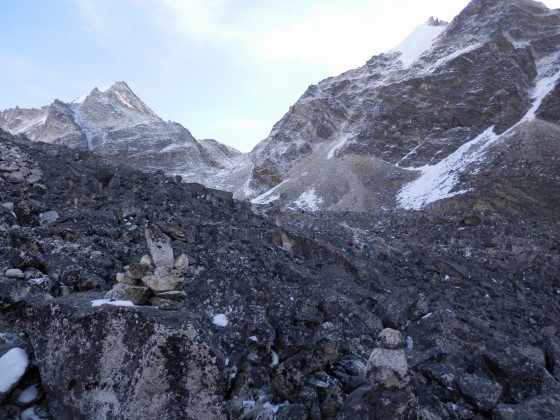 Next one has to climb over these rocks to the Chola Pass ascent which you can see in the back. 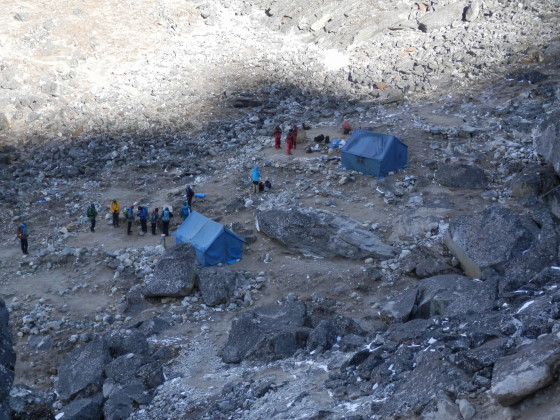 We’re now on the beginning of the steep ascent. One group camped out here! 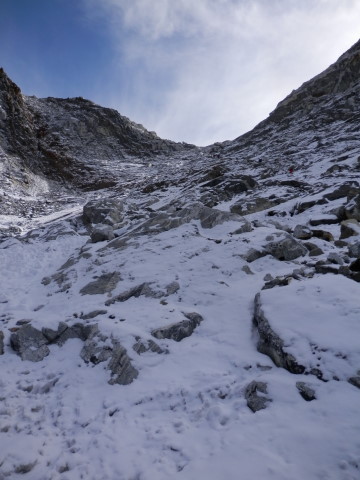 This is the climb up. It took around two hours and it was fucking hard. The top of the pass is 5360 metres so the atmosphere is around 37% only. As you ascend, you get out of breath really quickly. I sounded like I was auditioning for the part of Darth Vader in Star Wars. Also add to that, much of the track was covered in slippery snow. Also for good measure had my usual headache but remarkably not as bad as yesterday.

The climb is around 500 metres and you just take it 50 metres at a time. 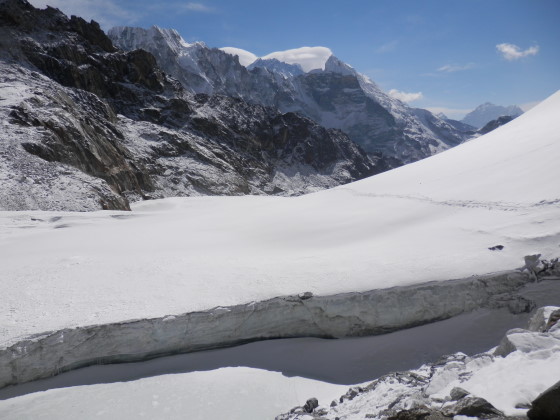 Finally made it! The view ahead from the top of the pass. 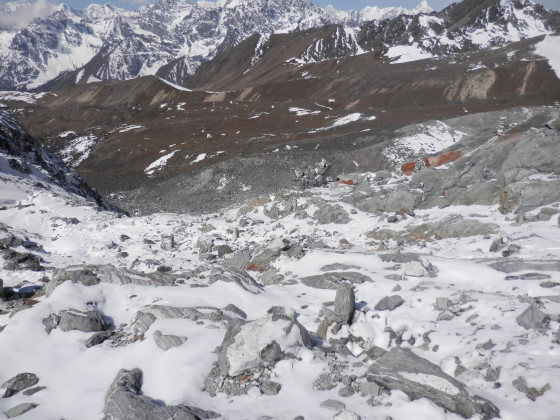 This is the view back down from the top. At this height we are slightly higher than Everest Base Camp. 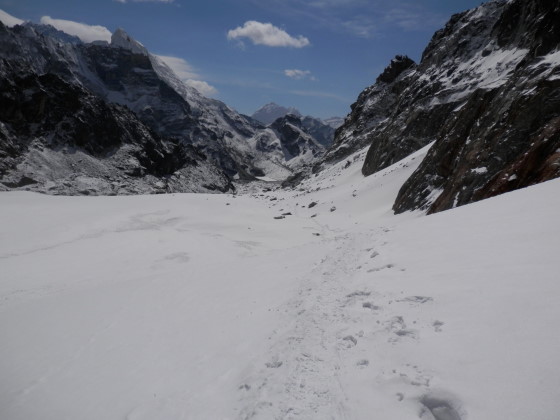 After a break the trek down starts. We spent around 45 minutes trekking through snow. At times on a very narrow path. I almost slid the the slope at one stage. The climb back up would not have been fun!

The ice axe got used a few times on patches where it was too slippery. 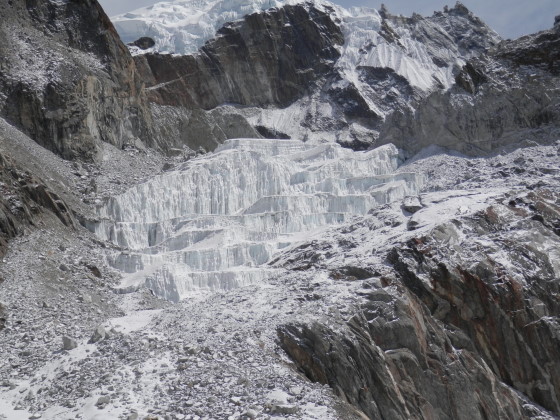 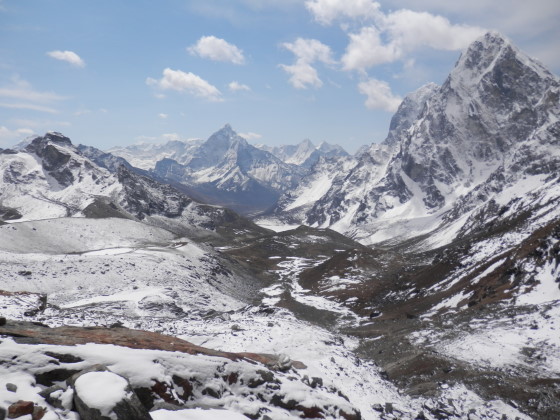 The rest of the descent down and then trek along the flat to Dzongla. 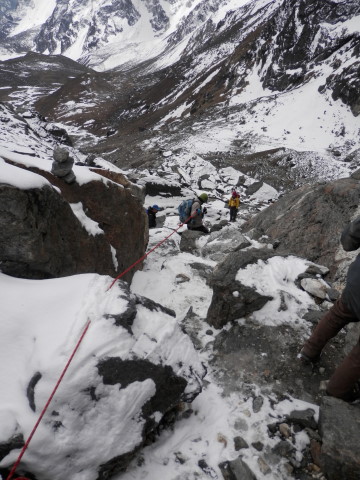 On three occasions we had to use ropes to help the descent as it was so icy. If anyone from Southern Cross Insurance is reading this please note this technically was not mountain climbing, as that is of course excluded from my travel insurance coverage 🙂 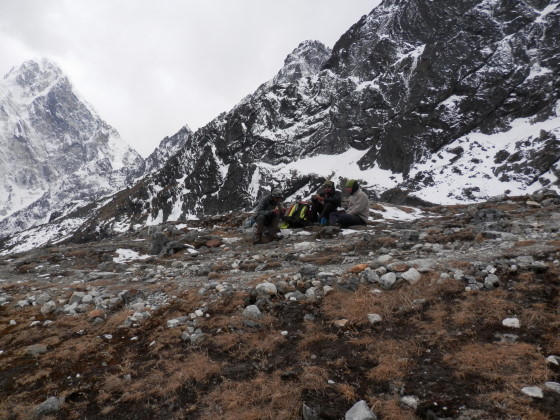 We had lunch as this spot halfway down.  Photos can not capture the amazing panorama views of snow covered mountains on all sides as you sit on the rocks and have chapati and a boiled egg! Oh yeah, I’ve been vegetarian for a week now! 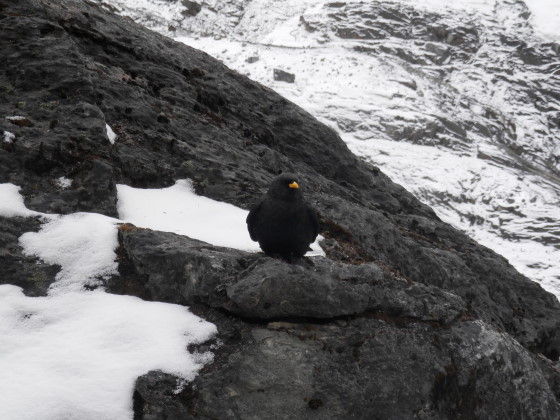 When there is food, there will be a bird wanting some! He looks like an extra from The Omen. 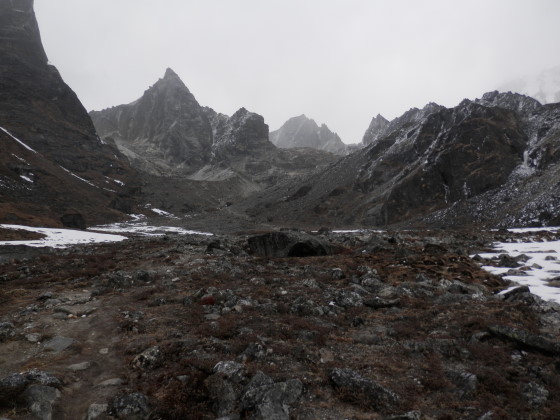 The final stretch. It started to snow lightly for the last 90 minutes – the first time we had been caught out in the snow. 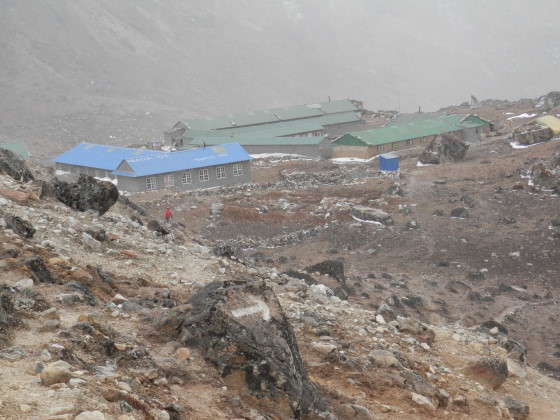 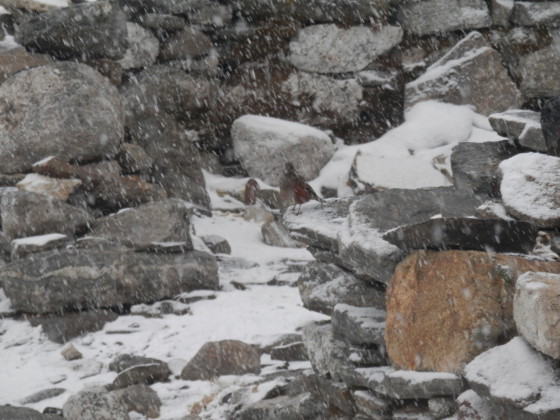 For the last 10 minutes it started to snow more heavily so we got here just in time. You can see the poor bird in the snow.

A really hard but great day. The views were amazing. Going through a valley with snow covered peaks on all sides.

We didn’t know this before we crossed the Chola pass, but the main guide said we were the 13th group he had taken across it and we were the first group he had guided to have every party member successfully make it. Every other group had one or more people unable to complete it, or even get helicoptered out.  So that was a pretty good achievement.

We’re now two days off Everest Base Camp, all things going well. The height here is around 4860 metres which is the highest we’ve been overnight.