Following confirmation of the size of the Executive, and composition of Parliament, here are the salaries different MPs will be on: 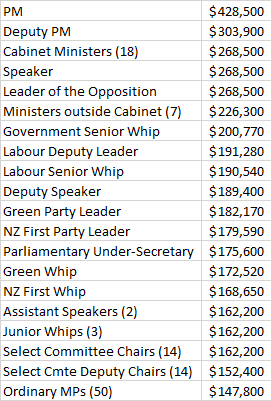 Worth noting that David Seymour as a Parliamentary Under-Secretary is paid only slightly more than the Green Party Whip.

Also note that while the Green Party Leadership is shared, they get just one leader’s salary. I suspect what they do is split the additional $34,370 between them so they each get $164,985.

Select Committee Chairs and Deputies have yet to be determined. There are 14 main select committees, but it is possible there will be less than 14 chairs and deputy chairs as some MPs may be a chair of one and a deputy of another. I’ll update once committees are known, if it changes.

For a fair number of MPs, they take a significant pay cut entering Parliament. For others, it is the most money they have ever earnt, or will earn. Overall I think the levels are about right, but as always they should set the pay levels to be constant for an entire term of Parliament.