The FBI in December 2014 published the latest hate crime statistics which are released annually. The latest survey covers 2013.

A hate crime is a traditional offense like murder, arson, or vandalism with an added element of bias. For the purposes of collecting statistics, Congress has defined a hate crime as a “criminal offense against a person or property motivated in whole or in part by an offender’s bias against a race, religion, disability, ethnic origin or sexual orientation.” Hate itself is not a crime—and the FBI is mindful of protecting freedom of speech and other civil liberties.

The FBI has a detailed overview online of their methodology which can be found here. It is too long to discuss in depth here but here is an excerpt from the introduction.

The Hate Crime Statistics Program of the FBI’s Uniform Crime Reporting (UCR) Program collects data regarding criminal offenses that were motivated, in whole or in part, by the offender’s bias against a race, gender, gender identity, religion, disability, sexual orientation, or ethnicity, and were committed against persons, property, or society. (See below for information concerning new bias types, such as gender and gender identity, and other changes to the hate crime data collection.) Because motivation is subjective, it is sometimes difficult to know with certainty whether a crime resulted from the offender’s bias. Moreover, the presence of bias alone does not necessarily mean that a crime can be considered a hate crime. 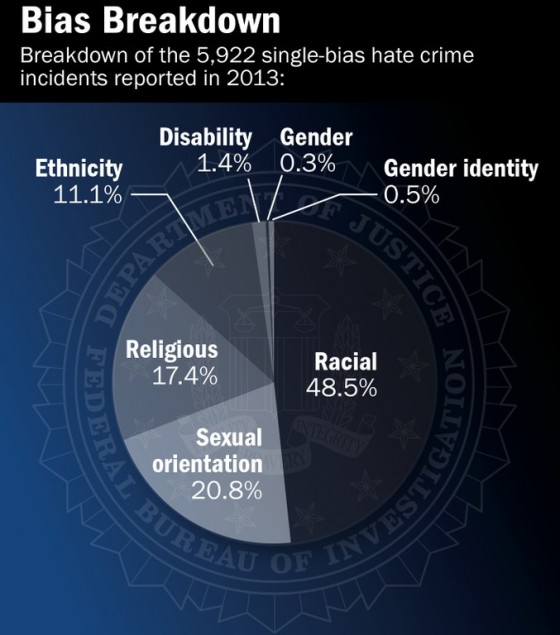 These have been summarized for this post for reasons of brevity. A more detailed breakdown can be found here.

1,461 victims were targeted due to sexual-orientation bias.

There were 1,223 victims of anti-religious hate crimes.

In  2013 the FBI reports that there were 5814 known hate crime offenders. The breakdown of the race of these offenders is as follows.

There are some revealing statistics here including:

1. Anti black/African American bias is significant factor in racial crimes.
2. Gay hate crimes (male) are much more prevalent than transgender, lesbian, or bisexual hate crimes.
3. Anti-Jewish hate crimes are much more common in the USA than those against Muslims.

The good news is according the FBI hate crimes are down from 2012.

It would be interesting to see a geographic breakdown of where these hate crimes are being committed.

[UPDATE]: Added a section to the post on FBI data of the race of known hate crime offenders in 2013.