This weekend brings GMO-sceptics to Wellington. Presentations include “Pesticides: scilencing the ecosystem and silencing our children” and “Overweight, undernourished, sterile and dying of cancer. Our food is it sealing the fate of humanity?”

And look who is hosting them, at Parliament: 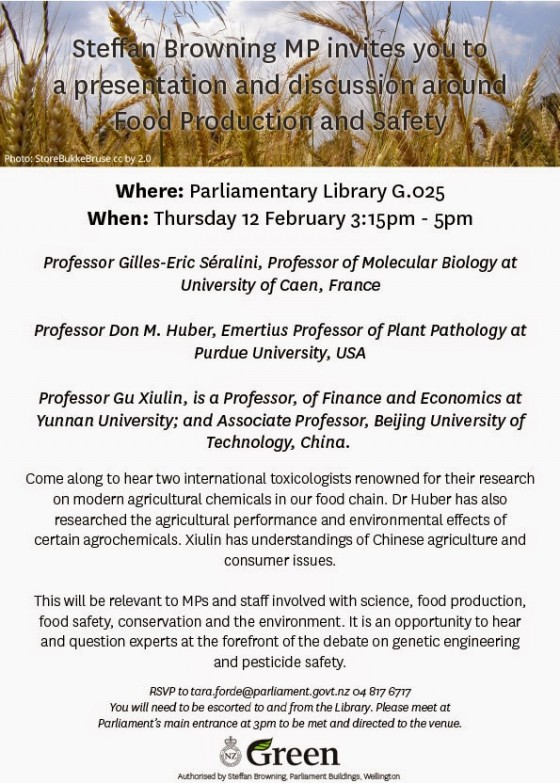 Crampton has details of the two speakers, such as how Gilles-Eric Seralini’s paper on GM food and mice was retracted.

89% of scientists think GM food is safe, a slightly higher percentage (88%) who think humans are mostly responsible for climate change. So it is fair to say there is a strong scientific consensus on this issue. Yet the Greens are hosting a conference or seminar of GM deniers and sceptics – at Parliament.

Now they have the right to peddle their pseudo-science. But let’s imagine if this wasn’t the Greens, but ACT. And ACT hosted a conference at Parliament of half a dozen climate change sceptics preaching against the scientific consensus. They would be denounced by a dozen lobby groups as being anti-science and abusing their position as a parliamentary party by allowing parliamentary facilities to be used in such a way. The Greens would be the ones most loudly decrying ACT.

So it is a useful reminder that the Greens devotion to scientific consensus is cherry picked to only apply when it backs their world view.