Everyone has been assuming that tying MPs pay increases to the average for the public sector will see them fall. I was assuming that. So I went to the Stats NZ QES survey to work out how much less pay MPs would have got over the last six years, if this new law had been in force the whole time.

To my surprise I found that the public sector have had larger (%) pay increases than MPs have!

If backdated, this law change would have seen MPs get even larger pay increases. 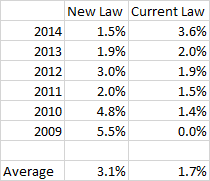 The right hand column is what the total package increase was by the Remuneration Authority under the existing law. The actual salary increases are sometimes more than this, but that is because of the decreased value of some personal benefits. That package approach continues under the new law – so this is comparing like with like.

So over the last six years the Remuneration Authority has only increased MPs packages by an average of 1.7% a year.

The average increase in the public sector, according to QES, is 3.1% a year.

So while this law change will reduce the MPs pay increase for this year, it could well result in them gaining larger increases over the long term than they would have under the current law.

The Remuneration Authority has in fact been very restrained in the last six years.

There is some benefit to the new law. It is a clear formula, that people can relate to – MPs get the same as public servants. However the history of the last six years is that this could well mean MPs end up with larger pay rises. Now I don’t have a problem with this, but I’m not sure this is what people realise the impact of the law may be.