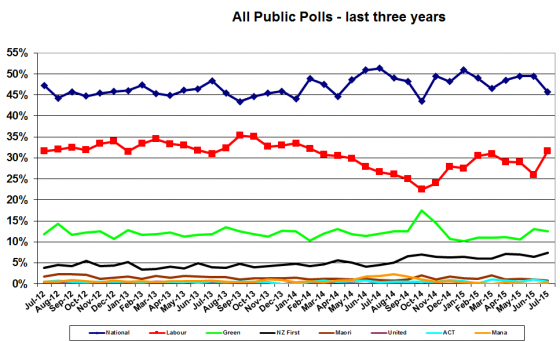 The summary of Curia’s monthly newsletter is:

There were three political voting polls in July – a Roy Morgan, One News Colmar Brunton and 3 News Reid Research.

The average of the public polls has National 14% ahead of Labour in July, down 10% from June. The current seat projection is centre-right 57 seats, centre-left 54 which would see NZ First hold the balance of power.

In the United States Donald Trump continues to dominate the Republican field.

In the UK Jeremy Corbyn has gone from being a 100 to 1 outside to the favourite with the bookmakers to become the next UK Labour Party Leader.

In Australia Shorten’s approval ratings continue to decline after his testimony at the Royal Commission into union corruption.

In Canada they remain on track to elect their first ever NDP Government. The Liberals continue to lose support to the NDP.

This newsletter is normally only available by e-mail.  If you would like to receive future issues, please go to http://curia.us10.list-manage.com/subscribe?u=e9168e04adbaaaf75e062779e&id=8507431512 to subscribe yourself