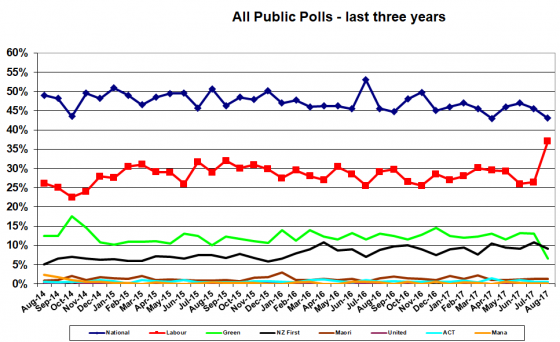 A big month in the polls, as you can see above. The monthly newsletter is out, and the executive summary is:

The average of the public polls saw National 6% ahead of Labour in August, down 13% from July. Note that this includes all polls in August including those that taken before or during the leadership changes in Labour and the Greens.

The seat projection for August was centre-right 54 seats, centre-left 54 which would see the NZ First hold the balance of power.

National’s party vote is 3% below a year ago and 6% below three years ago.

In the United States as the rhetoric around North Korea escalates Trump’s approval for foreign policy falls.

In the UK, the Conservatives and Labour are almost neck and neck in the polls.

In Australia, Labour have extended their lead over the Coalition to 8% on a two party preferred basis.

In Canada, The Liberals maintain an 8% lead over the Conservatives.

We also carry details of polls on Whangarei, Israel, Maori seats, Ohariu, water tax and the top tax rate as well as business and consumer confidence.