Jenna Raeburn of Barton Deakin looks at the Australian election:

The polls have been 50/50 or 51/49 through the entire campaign. However, on a marginal seats analysis, it’s difficult to see how Labor will pick up enough seats – they need to win a net 21 for a majority.

Shorten started out strong but the long campaign has proven to be the right tactical move as Turnbull has gradually pulled ahead. The betting markets have Labor at around $7-8 to win and the Coalition around $1.10. Virtually nobody is saying Labor will win anymore. 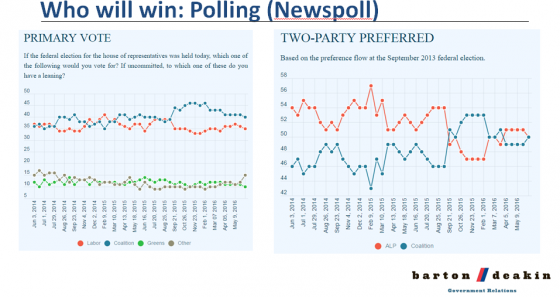 How many seats are needed to win?

As 76 seats are needed to govern, the Coalition needs to lose 13 seats to lose government. This is very unlikely. Even more unlikely is Labor picking up 21 seats to win a majority. The only (virtually impossible) path to Labor victory would be to cobble together a coalition of minor parties and independents.

What does a Turnbull win mean for the leadership of both parties?

Shorten has run a strong campaign and will pick up some seats from the Coalition. This is likely to be enough to cement him as the leader for now.

For Turnbull, the issue is not just winning, but winning well. If he loses too many seats to the ALP he will be in trouble. It will also make life difficult for the Coalition if they do not have enough seats in a joint Parliament across both the House of Representatives and the Senate (more on this below).

Importantly, there is a possibility that Turnbull wins the election but loses the popular vote. So while winning marginal seats is all that matters for the election outcome, it’s important for his mandate and leadership to win the popular vote as well. With the polls at 50/50 on a two party preferred basis, this is impossible to call.

Which seats will swing?

There could be a few random results. 21 members of the lower House are retiring, many of whom are long serving. This leaves some previously “safe” seats wide open as they may have been safe on the basis of personal popularity rather than party preference.

Queensland – there is a bit of swing but not enough to change much. You could even see the Libs holding everything, which seemed impossible eight weeks ago. They will lose between 0 and 3.

New South Wales – enough for a net 1-2 seats to change; but there is also a strong, popular LNP state government. The LNP is even looking pretty good in marginal seats like Robertson and Dobell. Labor might pick up a couple in Western Sydney.

South Australia – is the one to watch. The Nick Xenophon factor makes this the most unpredictable state by far. Xenophon is a popular and clever politician who has gone from an independent Senator, to leading a party (the Nick Xenophon Team or NXT party) which may well pick up two seats in the lower House and 3-4 in the Senate. If NXT is able to come second, the preferences of the third party (whether LNP or Labor) will flow to them. Labor seems to have collapsed in SA. One seat could even come to the Coalition.

How many seats will the Government drop?

This is the big question for Turnbull. He not only needs to be returned, but returned without a significantly reduced number of MPs. A few weeks ago it looked like they could lose between eight and 15. Now, a net loss of five or fewer is optimistic but not unachievable.

So what seats should I watch?

Also watch out for the Greens in Batman and Grayndler (Albanese’s seat) where they have put up a good fight. 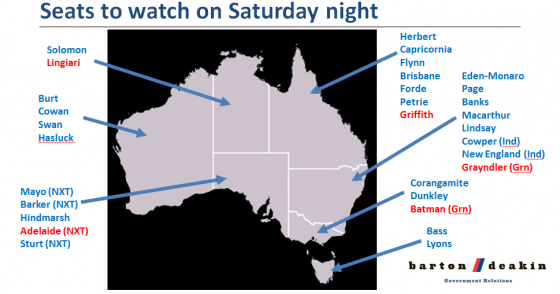 What are the big issues in the campaign?

Leadership  – The defining issue for the Liberal campaign is Turnbull’s leadership and the importance of stability. He was shaky at the start of the campaign but increasingly looks and sounds like a leader – especially compared to Shorten.

The economy – For Turnbull, the campaign has focused on economic management and “jobs and growth” (repeated ad nauseam). Good on him for sticking to his guns on the economy as these messages are paying off, particularly in the wake of Brexit (more below).

Health – The big issue Labor is running is essentially a scare campaign around Medicare with claims that the Government will privatise or undermine the health system somehow. Though Turnbull has flatly denied this, the ALP seems to think that as long as they are talking about Medicare, they will be on top of the narrative as it is traditionally strong ground for them.

Debt – Labor’s biggest problem is long term spending, though the Libs don’t balance spending either. Australia is eight years behind New Zealand here – we are finally back in surplus, while they are just starting to think about addressing debt.

There is no doubt that Brexit has helped to cement Turnbull’s position in the final week. Voters are more worried about instability – so Turnbull’s messages around stability, leadership, consistency and the economy are paying off.

If Abbott was the leader we would have seen a very different campaign issues-wise, and we probably wouldn’t have seen the same impact from the Brexit vote.

Abbott has been well behaved for most of the campaign until the last week or so. He and other elements in the party have been clearly agitating for the election to focus on border security and immigration issues, but Turnbull has stuck to his guns on the economy, and good on him for doing so.

There is no doubt that calling for a double dissolution was a massive strategic error. It’s hard to work out why Turnbull did this in the first place – the former makeup of the Senate was intolerable, but it’s hard to see how this would have improved in any scenario. The post-election Senate will be a mess with no party holding a majority.

The double dissolution was called because the Senate refused to pass the ABCC Bill. A feature of a double dissolution election is that there will be a joint sitting of Parliament to consider this Bill immediately following the election. This makes it important for Turnbull to not just hold enough seats in the lower House, but to hold a majority in the combined Parliament (i.e. a majority across the combined 150 seats + 76 Senate seats). He should achieve this as long as they don’t drop too many seats in the lower House.

This will be a very interesting election to watch – not so much for the overall result, but for the movements in individual seats and the impact on Turnbull’s leadership.

A complete guide for seats to watch, as well as campaign policy updates, are available here: http://www.bartondeakin.com/category/barton-deakin-briefs/