The Tango was invented in southern Buenos Aries as a passionate folk dance of the poorer people. That is disputed, a bit like where the pavlova came from. It was considered immoral and disregarded but much later the French (cabaret I think) picked it up and it was anointed by the Argentinian elites. It was danced for the first time in a respectable facility on the famous 9th July Avenue. It instantly became respectable if riské – a universal truth that if the rich appropriate something it becomes ‘cool:’ (cigarettes; Andy Warhol; flappers; taking drugs; top hats; powdered wigs; pantalooms; beards). You can see this passion and vibrancy for life -as in dance- everywhere in Buenos Aries: the architecture, the colours, gesticulation in cafes and on street corners.

Below; typical street bars and cafes celebrating Tango; and the way Portanes (citizens of Buenos Aries) tattoo themselves (we go for Polynesian black or blue swirls)  I found this human art quite interesting as it is more Scythian than Polynesian with which we are familiar. 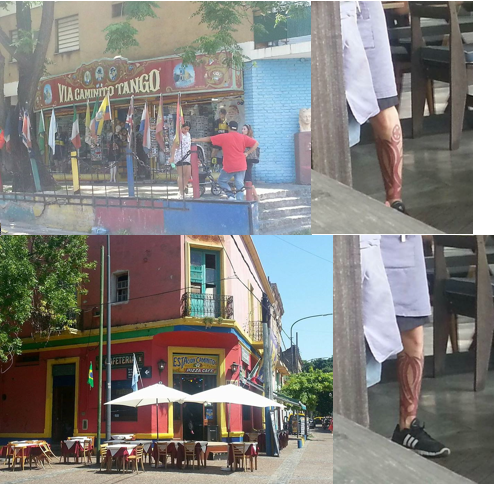 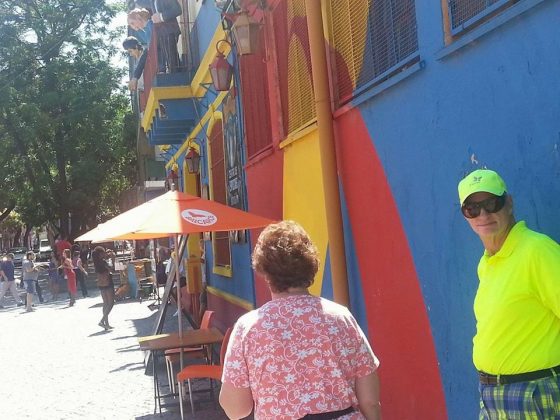 Above: you do see these electric colours in Buenos Aries everywhere but generally Portenas (people of the port) dress down and are very casual whereas Brazil is all about fashion and facelifts. Love the colours of the buildings which is like the Greeks in Santorini or women’s attire in Nigeria. Bright and cheerful and embracing of life and colour.

I mentioned earlier cultural gaudiness (ancient Greece and the Puerta Madero suburb of old Buenos Aries). Here are some more images of this unique indigenous architecture made up of gathered materials and what could be got at hand thus the eclectic mix of colours that then became a thing.

Below: the beguiling cobblestone streets and colour of San Telmo and La Bocha are suburbs of the historic old south the working class strongholds of Buenos Aries. Think peeling stucco enriched by the culture of African slaves who came in through the port followed by later Italian immigrants in the 1880s.  It remains one of the poorest districts but has a thriving art scene (I recommend a stroll around El Caminito street) but beware the Tango escorts who will pop a hat on your head and take a photo and you’re then expected to pay. While we’re on that also resist the street beggars who in BA have children with them; they may get you to hold their baby or child while they pick pocket your wallet or bag. 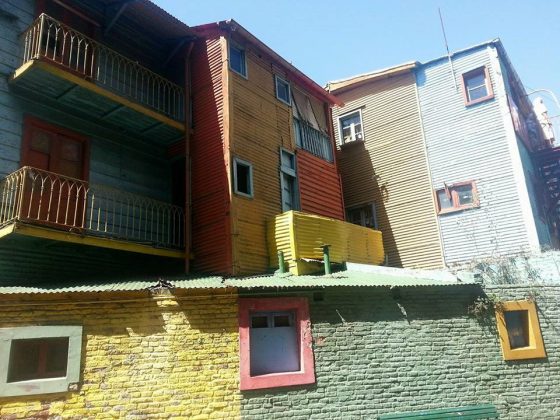 I was very taken with the street art and murals everywhere in BA; the one above commemorates some historic fire I think or the fire service. Their murals are often three dimensional as in El Caminito where lurid paper mache sculptures leer down at you from balconies or from shop doorways or carved in high relief as above. Below is a while district faced by these murals and you can see some of the three dimensional figures as well. The folk art traditions of BA are rich and unpretentious and so far unencumbered by Globalist influences. 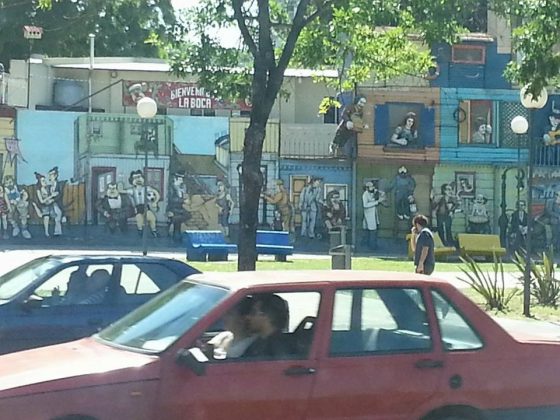 One of the things that interests me when travelling is what police cars and taxis look like and what security guards are dressed like: here is a police car and their taxis are small black sedans with a canary yellow roof (so a blend of London and NY cab). The Police look like black storm troopers. 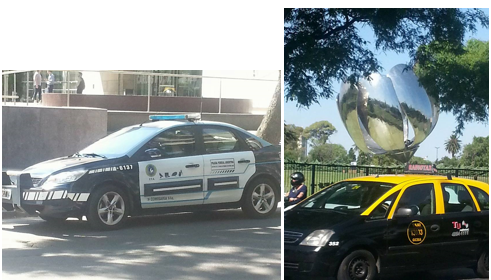 In the image above (right) you can glimpse the famous BA crome flower sculpture in the Plaza Nacionas Unidas the Floralis Generica. This opens and closes (when it works – so Argentinian). That is a good segue to my surprise of BA – the vibrancy and depth of their arts.

We spent an amazing day at two BA art galleries: The Malba and the Musee National de Bellas Artes and I recommend you visit both (the latter is by far the best).

The Malba is in Palermo (the embassy district) and costs to enter and is contemporary art. The MNdBArtes is a short walk down the Plazas of Uruguay and Chile to Recoleta and is free. The latter has an AMAZING art collection and I mean WOW.  Because you can walk between the two galleries this is a good trip and there are lovely cheap street side cafes in between opposite the Law faculty which is half way between.

Above: Palermo the embassy district; and right the intimidating university Law faculty (university is free in BA and you can study anything) between the two art galleries which as far as architecture goes would cheer National Socialists (an ugly monolith). Looks like the NY Post Office.

If DPF is interested perhaps I’ll showcase some of the amazing art we discovered at the free Musee National de Bellas Artes as a separate series of posts – so far the highlight of this trip for me – but Tomorrow we’re off to the markets in Recolata (the biggest flea market in BA).

Below: the Musee National de Bellas Artes. Me with Frida Kahlo (in whose home Trotsky was murdered with a pick axe; and no that’s not a kakapo or kakariki). And with Jackson Polluck (you like my matching shirt?)  ~ J. 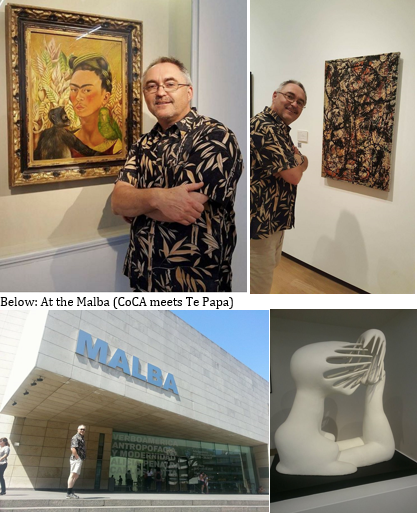