Hauling in to Buenos Aries from Christchurch is a long flight (11 hours and 14 hours back in the head wind so London haulage level). We fly south of Stewart Island to catch the southern Antarctic stream to push us east. On the way back we’ll fly close to Antarctica and will glimpse it (very cool – literally).

First impressions: Argentina is flat like the Canterbury Plains and huge, and hot (28 degrees). Ringed around the airport the city is grimy, depressed and poor and has obviously seen better days. It is perhaps 30 minutes in before you start to hit affluence, high-rise buildings and typical modernity.

Argy feels like New Zealand. We are about the same latitude and the trees and sky and scape are similar so it feels familiar. It’s like a jungle with a few Western flowers poking through – a few isolated English words: “McDonalds” “SubWay” in the foliage of “Reconquista, Nationale Banko, tacos, servicios banos.” An obvious place to visit is “Gracis” as there are signs about this place up everywhere.

Below: The ubiquitous photo from the hotel (word for the day: “grimy”). And the unusual street level bollards in Buenos Aries I guess to stop guys like our bus driver parking on the sidewalk? They look conspicuously Spanish Inquisitional! 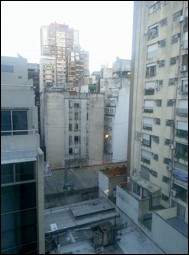 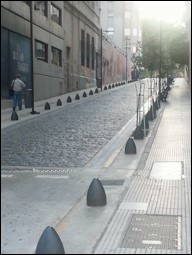 The Argentinians are very casual – sort of ‘Kiwi summer beach chic’ which I like.

Our bus driver pulls up on the sidewalk and disgorges us in a narrow lane so we can scurry Alice-like down a burrow into a nice transformational Wonderland hotel. We’re at HotelMelia (which means “Grouse Hotel”) not absolute top notch but better located in downtown Buenos for outdoor cafes and restaurants etc.

We grab a street bar directly outside the hotel. It’s full of people and the sound of street-level Argentina is hundreds of people talking which fills the air, like Christchurch’s Oxford Terrace “Strip” used to sound -where The Terraces is (still) being built – before all our earthquakes. I miss that vibrancy.

It’s fun trying to order. Wifos Unos is precise and trying to explain her food preference in schoolteacher chemistry detail to the waitress who speaks no English. Being a Kiwi (and a bloke) I just go “Por far for: MEos BEERos; CHIPos” [“Chipos”?] “POTATOs! BOWLos”  [“Ah Si Si!”]  “Water for Senora” [“Wa-ter?”] “Aqua” [“Ah- Si Si!”] and we’re sorted.

The beer is watery and far less rich in flavor than New Zealand beer so perhaps they water it down and go for quantity like the Greeks do with wine.

It’s balmy and nice out so we scout out a convenience store “Open 25 Hours.” But like most convenience stores near hotels its full of oreos, crisps and confectionary (confectionaries). I buy some yoghurt and am pleasantly surprised. A bag of groceries sets us back the same as our chips and beer $400 pesos  ($30 bucks). We have to read several packets to work out what’s inside “Is that cow?  Dairy?”  Pictures are great. 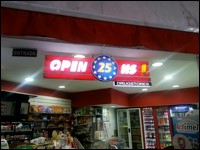 Lots of great street art everywhere in Buneos Aries which I want more of back in Christchurch (more of which later).

But tomorrow the sites and excitements of the city. And later perhaps the best book shop in the world. 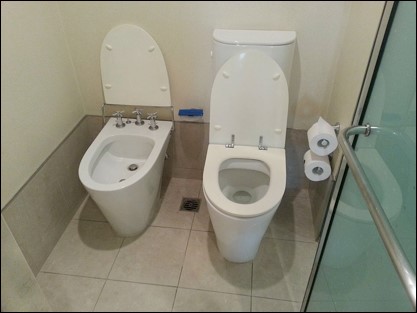