South America is known for its dinosaurs so we had to visit Buenos Aries’ Bernadino Rovadavia Natural Sciences Museum that has an awesome collection. One of my childhood dreams was to visit the Le Brea tar pits after reading about them in a magazine; so I made a bee-line there on my first ever trip to LA (amazing place). Thus Rovadavia while in BA. (I’ve never understood why we don’t have better dinosaur displays in NZ – we could easily trade facsimiles of our unique moa skeletons for dinosaur skeletons from other museums ??). 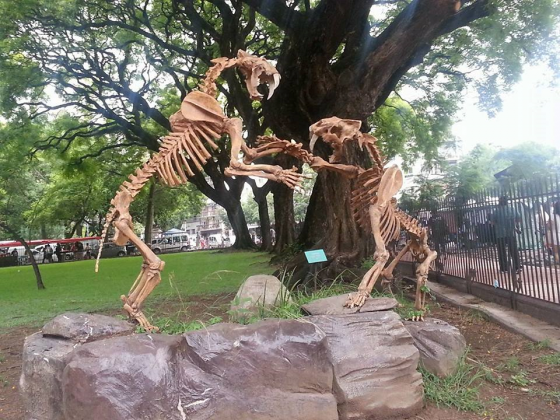 Above: Sabre-Tooth Tigers (Smilodons) cavort outside the entrance to the Bernadino Rovadavia Natural Sciences Museum. Known in numbers at the Le Brea tar pits in LA these large lion-tigers (Napoleon Dynamite’s Ligers?) clearly roamed much of the Americas before going extinct along with the other mega fauna of these continents. 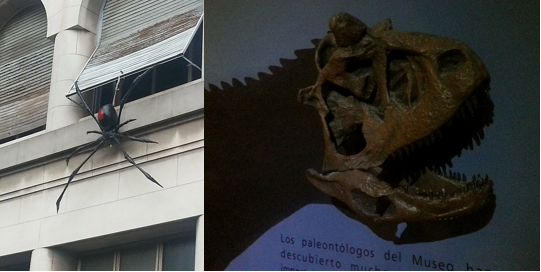 A huge Redback climbs out of a window at the entrance way opposite the Smilodons.

The BA museum is not that well lit and some of the displays are a bit nineteenth-century however their collection rivals Te Papa or Canterbury Museum (our best regional museum in my view alongside Waiouru Army and the Auckland War Museum). BA will cost you $40 pesos ($3.61 NZ). There is no cafeteria and it is very hot inside with no air-conditioning so take a water bottle. 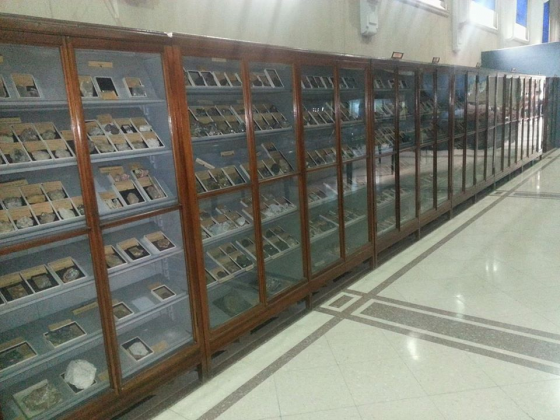 Great collection for study but some halls need curation – a bit nineteenth-century. 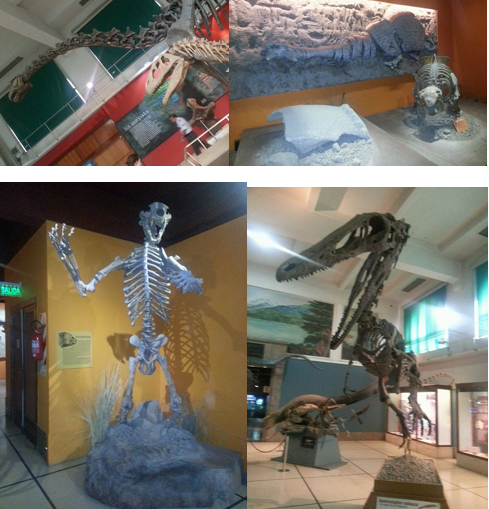 A cave bear; many of the displays are really well articulated such as this raptor.

This was weird a Cyclops lamb perhaps a hoax or a real mutant: there is one in formaldehyde either to extend the hoax or prove it was a real deformity. 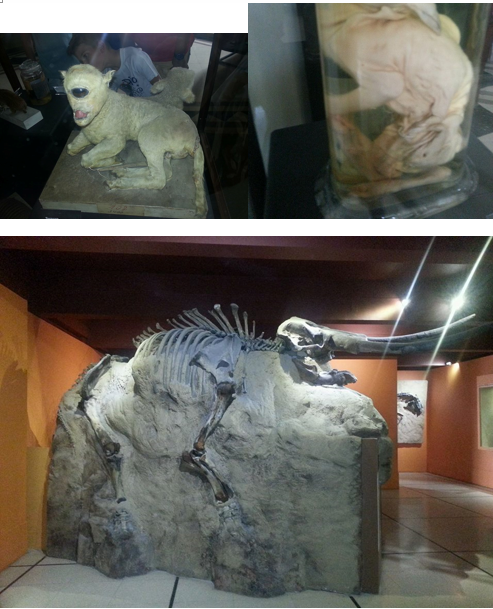 Below: Only one of the six images below is a ‘dinosaur’ – can you tell which one? 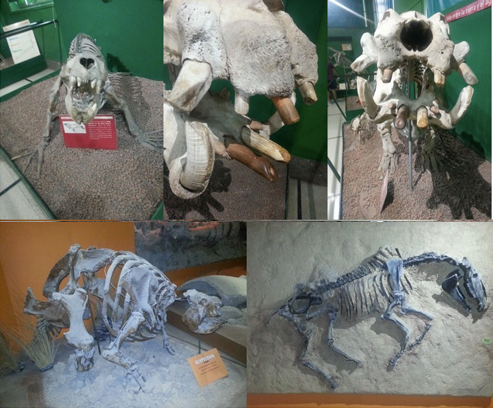 DINOSAUR? Left to right clockwise: Seal; Hippo; Hippo; Dinosaur; Equus (horse). The latter died out in the Americas only to be reintroduced by the Spanish and taken up by select tribes of Plains Indians; the short Siberian pony was almost extinct on those Steppes too but a collector had some and now wild herds have been re-established on the Mongolian Steppe. 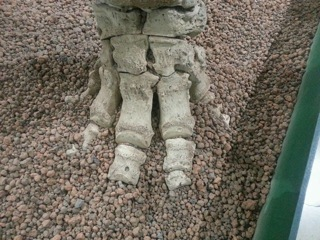 There was actually a real “taniwha.” 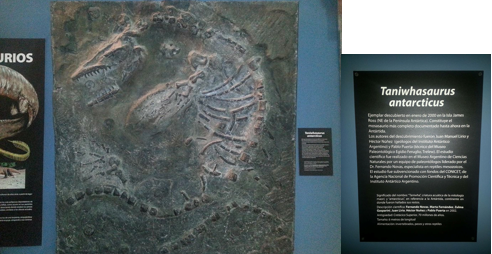 Some of the dinosaurs were truly gargantuan. 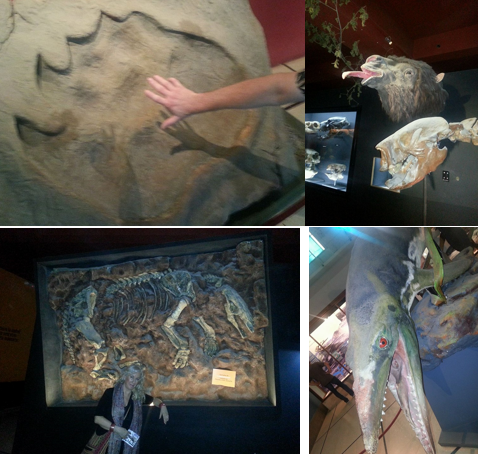 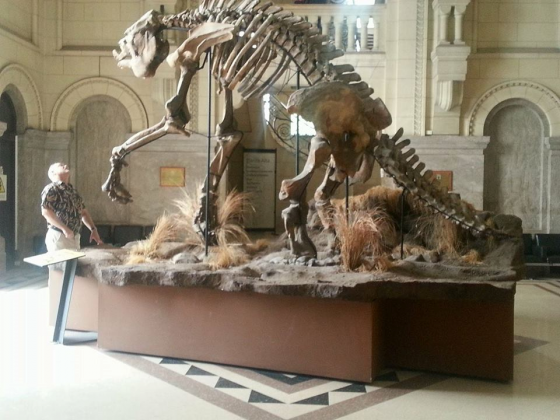 Some old guy checking out a “ground sloth.” Personally I don’t think they inhabited the ground – too easy as prey (built for climbing not running) and their feet don’t suit walking; I believe they lived most of their lives up in the titanic prehistoric trees like sloth do today and just ate and crapped up there safe from predators. Beware below of golden rain.

In the central dinosaur hall is this very cool sand pit with buried dinosaur bones that kids can ‘excavate’ as budding archaeologists. 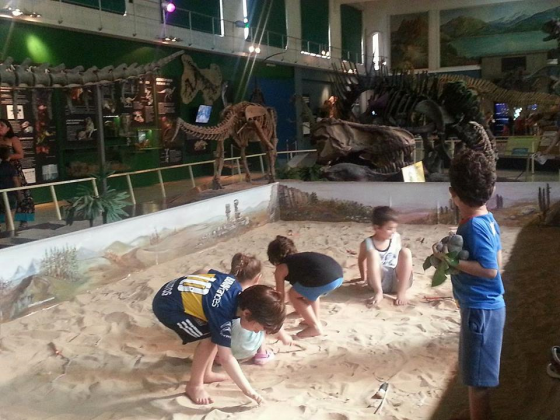 The mammals in the museum are beautifully displayed and there are some great animations such as the leopard and hyena wrestling with a dead warthog; the leopard in a tree the hyena pulling from the ground. 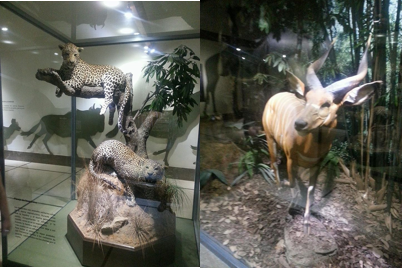 Below: I really liked this display that shows the birds of Buenos Aries with a photographic backdrop. The bird dioramas at the Canterbury Museum and its famous bird hall are painted so I’m not sure which I prefer photos or painted backdrops. 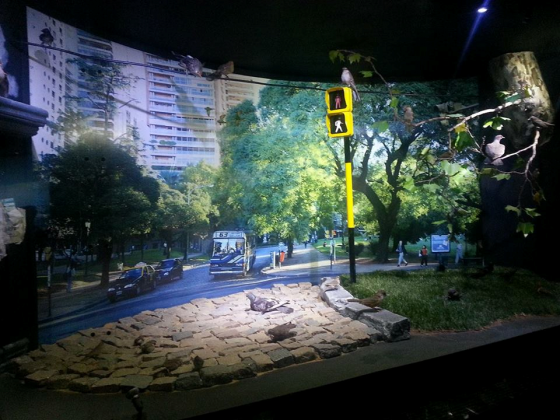 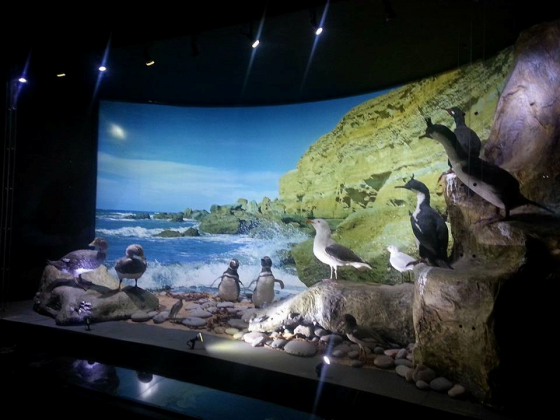 Plenty or creepy crawlies and this majestic Condor the largest wingspan of any bird and famous to Argentina. 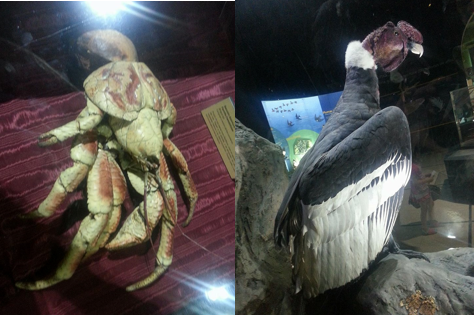 Humans appear amidst the prehistoric animals and there is this great diorama that equals those of the Moa Hunter and archaic Maori dioramas at the Canterbury Museum. 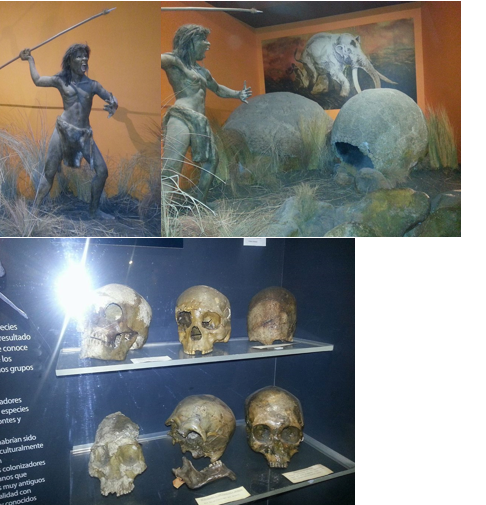 The museum is great and cheap and well worth a look. I recommend you go on the weekend as ringing it are these 200-300 crap stalls selling everything from an old fencing hat to a dried armadillo to a stuffed duck.