I blogged on Sunday about how a Climate Change Performance Index ranked NZ only 31st out of 56, and how it had fallen nine places from last year.

Now an overall index score is by its nature a composition of various sub-ratings. And the published report did not give a breakdown, but I e-mailed the authors, and they kindly supplied the below table: 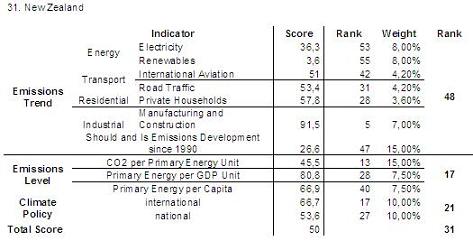 The individual ratings are fascinating.  The emissions trend is about whether or not actual emissions are heading in the right or wrong direction.  And despite eight years of Labour, NZ is in the bottom ten countries.

Imagine the howls of protest from the Greens if it had been a National Government?

Even worse, if one looks at energy emissions trend, we are basically at the bottom of the world – 2nd to bottom and 4th to bottom.

So when one hears the rhetoric of leading the world in carbon neutrality, remember the actual substance is the exact opposite.

And maybe one will have a but more sympathy for the very reasonable suggestion from the NZ Institute that we should aim to be a fast follower rather than a world leader.  For let’s face it – at moment we’re not even a slow follower – in fact we’re sprinting in the opposite direction.

Maybe we would be doing better if the Environment Ministry (and the Minister) was spending more time on policy, and less time on government advertising campaigns to tell us all how much the Government cares.

Not that this means we should accept any and all policy suggestions put up.  In each case a study should be done of what are the costs and benefits.  There are real debates to be held about the amount of money you spend on mitigation as opposed to adaptation.