I’ve been tracking the public polls on a date and size weighted average since the beginning of July. The graphs of these are below: 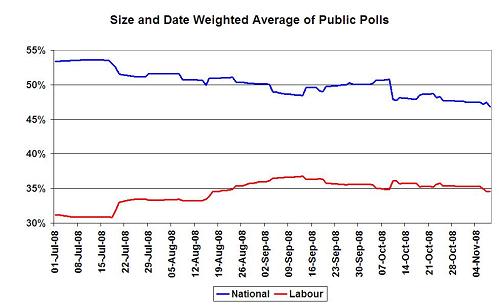 When new polls come out, they cause the spikes. National declined over July from 54% to around 50% and then stayed there until the beginning of the campaign in early October. There was a jolt down to 48% initially but then generally held up finishing at 47%.

Labour has two good months in July and August going from 31% to 37%. But then they flatlined and decreased slightly ending up at 35%. 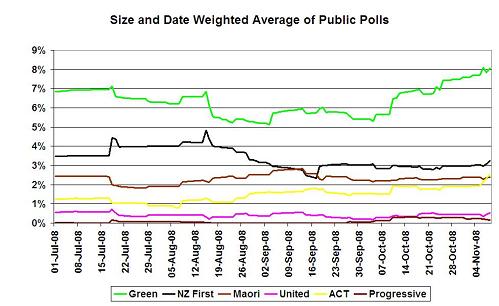 The Greens had a bad July to Septemer falling from 75% to 5% and hovering around the threshold. But the campaign period worked for them and they had a very steady rise over a month to finish at 8%.

NZ First started at around 4% and at times looked like getting 5%. The various scandals pushed him down below 3% and he has flatlined there for the last two months. A small lift in the final days but finishes at 3.2%.

Maori Party has changed little hovering between 2% and 3% – their focus has been the Maori seats.

ACT in July were at 1% and stayed there until the end of August and they have had little lifts through ending up at 2.5% and may go higher on the day as they made 3% in the final week’s polls.