I’ve previously blogged on my belief that the massive rise in youth unemployment is due to Labour’s decision in 2008 to abolish youth rates for the minimum wage.

Eric Crampton has gone better than mere belief, and analysed the relationship between overall unemployment and youth unemployment. 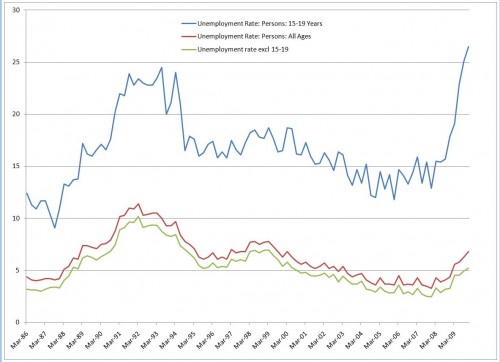 He then plots the “residuals”, which is how much greater or smaller the youth unemployment rate has been, compared to what the formula predicts. 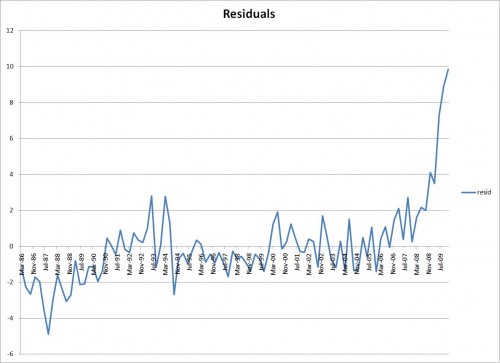 So that formula looks pretty good up until, umm well 2008. Eric continues:

And if one goes for different formulas:

I tried a few different variations allowing the constant and the slope to shift for high and for low levels of adult unemployment.  But none of that made any substantial difference.

The econometrics here are very simplistic and do nothing to account for differences in labour force participation rates or the obvious problem of serial correlation in the time series data.  But the simple model is still pretty telling.  If we allow youth unemployment rates to vary both as a level shift above the adult rate and as a multiple of the adult rate, which is what we’re doing when we run the simple regression with a constant term, we still have a jump in the current youth unemployment rate that is well above that seen in prior recessions.

My first cut explanation remains the abolition of the youth minimum wage.

Now this does not prove beyond doubt it was the abolition of youth rates that pushed youth unemployment up an extra 10%. But it is the most likely explanation.

The challenge for those who think abolishing youth rates did not contribute to the increase in youth unemployment, is to put up their own data and credible explanations to explain the massive gap between youth and adult unemployment.