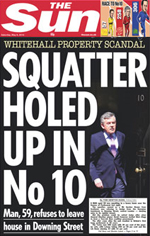 No one does headlines like The Sun. The story starts:

A MAN aged 59 was squatting in a luxury home near the Houses of Parliament last night.

The squatter, named as a Mr Gordon Brown from Scotland, was refusing to budge from the Georgian townhouse in Downing Street, central London – denying entry to its rightful tenant.

While the Guardian reports a Conservative memo on Europe may be a barrier to them doing a deal with the Lib Dems.

For my 2c, I am convinced David Cameron will be the next Prime Minister.