The Government has done a very nice job of not repeating their mistake at the beginning of the year when they over-egged expectations and under-delivered – which had Phil Goff reading out in the House my “B” grade to the PM’s beginning of year statement.

The tax cuts in this budget go well beyond what media had been predicting with a huge drop in the second lowest tax rate, and also a welcome drop in the corporate tax rate from 30% to 28% at 1 April 2011. This will help attract investment to NZ and matches Australia. The tax package gets an A- from me.

Two thirds of the “cost” of tax cuts goes to reducing bottom two rates and 73% of income earners will have a top tax rate of 17.5%. You keep 82.5% of every extra hour you work. 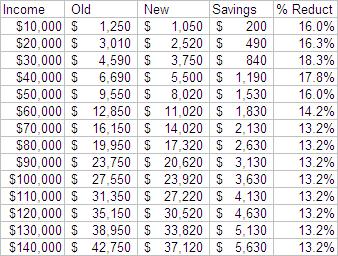 The table above shows the change in income tax for the various tax brackets. They’ve done a very good job of having the reductions fairly smooth across the board as a percentage of existing income tax paid. Those under $70,000 get the largest percentage decrease. 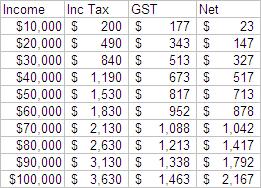 This table shows the net savings after impact of GST (calculated at 2% CPI increase). As one can see, people at every income level are left no worse off which was the objective.

However the above table only covers income tax and GST. There are also increases in superannuation, benefit adjustments, the changes to depreciation rules and the crack down on LACQs etc. Treasury has estimated the overall impact of tax changes as a percentage of the average disposable income. They estimate:

Some of the other tax changes are:

The property changes will see crown revenue increase by $2.5 billion over four years or an average $600 million a year.

$119 million of funding to IRD for increased audit and compliance is estimated to bring in $745m over four years or $200m a year.

Almost all of that extra $800m will come from higher wealth households.

This is why overall high income households are forecast to, on average, have only a 0.7% increase in disposable income – the same as low income households. One has to not just look at the income tax and GST changes, but the overall package.

And overall one has to conclude it has met the twin aims of both being fair and being good for economic growth.