MP Chris Carter has been suspended from the Labour Party after admitting to sending an anonymous letter claiming there is a plot to overthrow leader Phil Goff.

“His actions were stupid and disloyal,” Labour leader Phil Goff told a press conference this afternoon.

“There are no more chances. His future in the Labour Party is at an end.”

Mr Goff said Labour’s caucus had met today and a unanimous decision was taken to suspend him from the caucus.

And this was after Goff only demoted Carter to N 13 – a higher rating than Steven Joyce. The lesson in hindsight for Goff is he should have sacked him all the way.

A question to be asked, is was Carter alone and is the letter definitely not true? While his colleagues (the sane ones anyway) will be in horror at what he did with the poison pen letter, that does not mean there were not talks about the pros and cons of changing the leader.

Also one wonders whether or not any advice from New York was sought. Clark certainly would never approve of a letter like this being sent to the media. She know coups are done in the dark. But has she removed her “protection” from Goff?

Today’s letter, sent to several media organisations’ political editors, was in an old airmail envelope with Office of Minister of Finance, NEW ZEALAND printed on it.

The single-page letter said union-based MPs would challenge Mr Goff on Tuesday about a government plan to allow workers to cash in their fourth week of holiday.

The measure was one of a number of controversial labour changes the Government announced last week.

Mr Goff is reported to have told a radio station that he didn’t have huge objections to the fourth week being cashed up as long as workers arrived freely at their decisions and were not pressured.

Heh I highlighted that stance from Goff on the blog 🙂

“It’s a piece of malicious mischief,” she said.

“I don’t know but, as you know, I am a former minister of police and let’s say we are following some leads… I would hope we would (trace them). It’s a piece of malicious fabrication.”

The letter said the issue had bought to a head “growing discontent” within the Caucus about Mr Goff’s leadership and poor polling.

“David Cunliffe has a big smile on his face and many in the caucus now expect a move against Goff and King before the election.”

Mr Cunliffe said the letter was “complete rubbish and like my colleagues I am cross about it. Look at my face. That’s (the smile claim is) rubbish too.”

Cunliffe would have had nothing to do with it. He knows the job can be his after the election if he is patient.

How stupid was Carter to send it in the internal mail, and with his handwriting on it. Seriously – that is moron class dumbness. He also got caught on the internal CCTV cameras.

The letter also said George Hawkins would be challenged for his Manurewa electorate seat by a member of the Engineering, Printing and Manufacturing Union (EPMU) before nominations closed on September 1.

“George is threatening a by-election and since the party is broke, there is panic in the ranks over this prospect.”

I have heard from several sources that Labour is indeed pretty broke. For some strange reason having the chief fund-raiser also head up the largest union, hasn’t helped with collecting donations.

Good luck trying to oust George. He has a very loyal local team I am told.

The big question now is will Carter quit Parliament or stay on as an Independent? If he quits, then we have a by-election for Te Atatu. Considering the cause of the by-election will be a Labour MP being sacked for disloyalty because he resented criticism of his troughing, I believe the seat can be won by National. It will of course depend on candidate selection for both parties.

As Carter’s partner, Peter Kaiser, is the electorate chair that will make any candidate selection very interesting.

PS – thanks to the various people who texted me with the breaking news. Was worth waking up at 5 am for 🙂 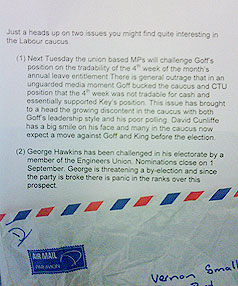 Thanks to Stuff, a copy of the letter. A hand written envelope. My God.

Interestingly I am not sure the letter is false. It does not claim that there s a coup on. It claims that the union MPs will whack at Goff over his leave comments. I am sure this is true and was planned. It claims Hawkins faces a union threat – again this appears to be true. No secret they want him to retire.

And the third claim is that many expect a move against Goff before the election. Carter did not say it was happening now, or that it would succeed – just that many expected a challenge.

Going back to a Te Atatu by-election, is this finally a seat that Phil Twyford can win the nomination for?

It’s enough to make his colleagues look like members of Mensa by comparison.

Also a reader reminds me of 2008 party vote in Te Atatu:

That was at an election where National beat Labour nationally by 11%. The gap is around 20% at the moment.