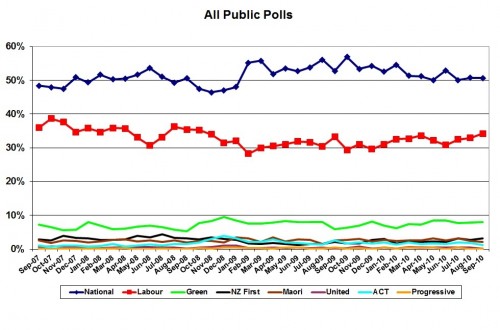 Sent out yesterday the polling newsletter for September 2010. It includes both Roy Morgan polls and the TVNZ poll. Doesn’t include the TV3 poll as that was taken mainly in October.

The newsletter is only distributed by e-mail – people can subscribe at this page. The summary for this month is:

September saw three political polls – an One News, and two from Roy Morgan.

The average of the public polls has National 17% ahead of Labour and able to govern alone.

Australia has mixed polls for the Government.

In the United States Barack Obama has a net approval rating of -5%, and the latest projections are for the Republicans to win 48 seats in the House (gaining control), go from 41 to 48 seats in the Senate and hold 28 of the 50 Governorships.

In the UK the Conservatives are on 42%, Labour 38% and Lib Dems 12%. The Lib Dems continue to lose support.

In Canada the Conservatives have a 5% lead.